It's a scorcher in Europe. France is expected to set a record for June with a temperature of 45 degrees Celsius.  The previous record of 41.5 C was set in 2003.

Meteorologist Reuben Hallali tweeted a heat map for June 27 next to the Edward Munch painting, The Scream. 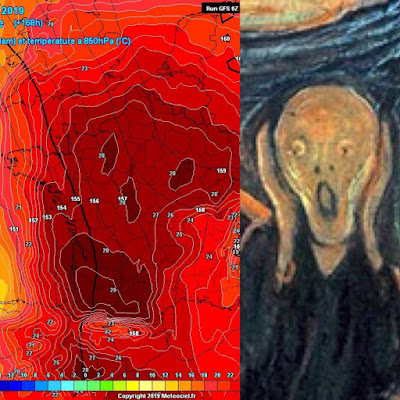 Scientists say heatwaves can be particularly dangerous when they occur in early summer, before people have adjusted to seasonal norms. Europe’s 2003 heatwave resulted in the premature deaths of an estimated 70,000 people.

From the low to mid-30Cs on Tuesday in parts of Spain, France and Italy, most weather models predict temperatures will rise by Thursday to the low to mid-40Cs in south and central France and north-east Spain, and the upper 30Cs in much of the rest of continental Europe.