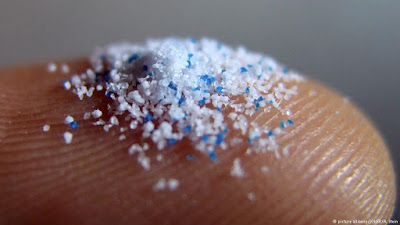 A whole new culinary tradition may be in store with news that humans eat plastic. A lot of plastic. On average, we eat at least 50,000 particles of microplastic per person per year.

The true number is likely to be many times higher, as only a small number of foods and drinks have been analysed for plastic contamination. The scientists reported that drinking a lot of bottled water drastically increased the particles consumed.

The health impacts of ingesting microplastic are unknown, but they could release toxic substances. Some pieces are small enough to penetrate human tissues, where they could trigger immune reactions.

Microplastic pollution is mostly created by the disintegration of plastic litter and appears to be ubiquitous across the planet. Researchers find microplastics everywhere they look; in the air, soil, rivers and the deepest oceans around the world.

They have been detected in tap and bottled water, seafood and beer. They were also found in human stool samples for the first time in October, confirming that people ingest the particles.

Yet again, the hippies were right:
You are what you eat.

Next step in recycling. Reclaiming plastic from the shit.

Plastic is one of the causes of Ulceration Colitis.

I just use a Brita water filter and jug. Makes better-tasting coffee and tea as well, although it makes no claims about trapping microplastics. The filter eventually clogs up, but I haven't had the heart to slice a used one open with my Dremel tool to see what crud has accumulated.

I have not purchased a plastic bottle of water. Not once, ever. Not even for someone as a guest of mine at a restaurant, and I tell them why - it was wanton waste 30 years ago, let alone now. It's my no go line. People can get upset all they want. Furthermore, with the reasonable water treatment plants most Canadian cities have, I have never seen why they should be allowed for sale. Obviously, there are towns with incompetents running the water show, and that extends to utterly useless small electric systems run in some cases by idiots with little training (which I know more about technically). And then there's First Nation reserve water problems. But in general, sucking water out of a plastic bottle has grown to be "cool", while I just think "idiot". And since hardly a soul gives it much thought, we have to realize how much the average citizen really cares about the environment; they seem unable to add two and two together let alone have any interest in doing so.

Good for you BM that you have fessed up about your entitlement to a Brita filter system!

Your filter should remove most of small polymer particles but you might get nanoparticles of silver (or copper) which is likely used in those filters as an antimicrobial/algicide agent.

My biggest gripe with tap water is with fluoride which is added to about 50% of municipal water systems. I drink a lot of tea, and tea is naturally VERY rich in fluoride (to a such extent that there is no need for a fluoridated toothpaste). So I do not want to overdose on fluoride.
And a simple water filter such as Brita will not remove fluoride.