Look What We Made 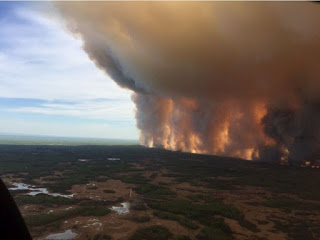 Whatever your choice, it's here and it is savaging the magnificent forest of the west. To university of Alberta prof, Mike Flannagan, it's "climate change in action."

Alberta's newly minted premier, Jason Kenney, claims to get anthropogenic climate change but says the wildfires are a complex issue. Who can really say?


It takes time for scientists to research and connect individual events to climate change, but Flannigan says it has become a major factor in Canadian fire seasons.

“We burn about 2.5 million hectares a year on average — that’s using about a 10-year average,” he says. “It’s more than doubled since the late ’60s and early ’70s. Colleagues and I attribute this to human-caused climate change. I can’t be any more clear than that.”

Most fire experts use a 10-year average for comparisons but even using a five-year model, the number of fires in Alberta so far this year is already closing in on that number.

Alberta Wildfire data shows that, as of Friday, there were 569 wildfires in the province. The five-year average is 616.

He says there are three reasons: longer fire seasons; drier fuels and more lightning, which research has shown is increasing by 10 to 12 per cent with every degree of warming.

“Increasing temperatures, like those observed across Canada, will lead to drier fuels, and thus increased fire potential, as well as longer fire seasons,” says a federal report that looked into the Fort McMurray fire.

A fire season extender, even if Jason won't admit it.


There’s already one sign that climate change is playing a role on the Chuckegg Creek fire (photo above) near High Level, says Flannigan.

“Getting May fires up there is really early for that part of the province,” he says, explaining the area would normally start seeing fires in July. “Same with the Fort McMurray fire — that fire started May 1."

“The 2017 fire season in British Columbia — their busiest month is August — it started July 7 and that was really, really early for extreme fire weather for them.”

As an aside to this, Mound, or maybe part of the package, look at this chart: https://www.castanet.net/news/Penticton/258275/Snowpacks-nearly-depleted

In most of BC the snow pack is almost depleted and the woods are drying out. More fuel for those fires.

Climate collapse is a compound interest sort of thing. Each problem adds to all the others and the total accelerates.


It always causes me dread when the verdant greenery fades to greyish-green. I've heard that a fire ban is already in place. We will now have to wait and see.

No....Corporations, Governments and free Capitalism are responsible for this Global Emergency. Corporations are responsible for convincing the masses to purchase this or that...you will feel good. I have been frugal all my life...taking care of the environment where ever I can and I refuse to be label the problem for this disaster. Free Capitalism equals Freedom...freedom for whom you may ask..that is what I ask also. There is no such thing as the "trickle down" effect BS. Anyong