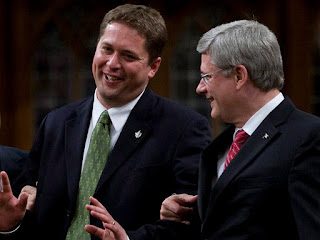 Oh these petro-pimps just don't stop. After Justin Trudeau wallowed in it, groveling at the feet of the Fossil Fuelers and their pipeline to "tidewater," now it's Andrew Scheer's turn.

The party’s newly released environmental plan has a variety of proposals that try to exploit Canadian technology and resources the party says could have a big impact on worldwide carbon emissions.

The Conservatives argue, for example, that if Canadian natural gas replaces a coal plant in China, then Canada should get a little bit of credit for that contribution to the global battle against climate change.

“Canada must look beyond our own borders and confront the climate change reality: it is a global problem, for which global solutions are needed,” the Conservative plan reads.

Yes, we do need global solutions, but the heavy emitters must lead. The petro-states and the industrialized or developed world are responsible for the great majority of the CO2 atmospheric loading that created today's existential threat and they must bear the brunt of slashing emissions. Canada is very much in that top tier.

Canada's overall emissions, despite our tiny population, rank in the Top Ten of all nations. Our per capita emissions, depending on the report, may put us in the Top Three, ahead of the US and Australia. And, when this diabolical pipeline is up and running - should that ever happen - Canada will be the energy superpower of Harper's dreams and will easily rank fourth for overall production of oil and gas.  We are not a nation that should take our lead from others no matter how that sniveling puke Scheer sees it.

That "Death Watch" reference may seem a tad hyperbolic, especially if you haven't read the latest warnings from the Inter-governmental Panel on Climate Change, the IPCC. The IPCC, best known for its demonstrated history of seeing climate change through rose-coloured glasses, recently warned the world has until 2030 to slash greenhouse gas emissions by half and then until 2050 to decarbonize our economies and societies if we're to have a reasonable chance of averting climate catastrophe.

Scheer, like his Liberal adversary, shows no interest in that warning, no hint they would do anything to meet the cuts needed. Canada, a genuinely "major emitter" on every score isn't up to averting climate catastrophe. After all, we're bent on rapidly ramping up production of the filthiest, high-carbon, high-cost, low-value ersatz oil, bitumen, and flooding it onto world markets.

I know it may sound nihilistic. It is. We've declared a state of climate emergency less than one day before approving a climate killing pipeline and in the same week that the Tory leader says "meh" to the existential threat facing our kids and grandkids. I know that may sound mad. It is. You've got to be damned near choking on cognitive dissonance to implement policies that we're getting from Scheer and Trudeau.

There are some among us who go on about our 'cherished Canadian values.' There they are.

The only solution now is to leave the TAR in the ground.
We have to stop. We're like junkies looking for another fix.

.. Michael Harris simply shreds Justin with 8 blunt questions.. via a most recent Tyee article. Andrew Scheer is just collateral damage.. with his winsome whine 'Canada's Clean Blessed Ethical Energy can replace all those Dirty Heathen Energies (Brent ? West Texas ? Saudi, Iran, Russia ?) thus saving Spaceship Earth from the Meanie Emmissions. Oh I forgot.. and some Canadian Technology that we will export too !!!!!

This glaring question confronts US (Canadians.. and yes, that certainly includes Albertans) If essentially 96 % of Canada's vast 'oil reserves' must be steamed or scraped out of Alberta's Tar Sands.. to transport 'elsewhere' - where the Sam Hill is 'Elsewhere' ? And by what magic carpet ride does the diluted bitumen (the so called 'oil') get to the getaway place. Oh please.. don't say Burnaby BC !

The unspoken reality is - its via pipelines west or south.. and we are talking massive volume.. if the price of Alberta's low grade bitumen can compete with Venezuelan Tar Sands higher grade bitumen via the Gulf Coast. And yes there are other price factors.. or should we say cost-benefit ratios

That's the lesson for today folks.. while we scratch our heads or asses re Trudeau green-lighting Trans Mountain.. and all that 'wealth' raining down blessedly up the greatful nation and growing economy Justin & Mr Morneau are 'building' .. or that Jason Kenney or Andrew Scheer will inherit ..

I know Alberta is large & has a fair chunk of Canada's (OUR) inland fresh waters, habitat & species.. but where will all those new tailings ponds be dug & filled.. or will Alberta just vent all the shit direct into the Athabaska River System, bound for the Arctic & say 'sayanaro' .. is that like deciding sewage can be pumped direct into uh.. Kootenay Lake or use the Bow River to flush it to Saskatchewan ? I can hardly wait to see the plan.. Flush it to Montana ? Be a real bitch pumping it over The Rockies to BC.. Who knew ? Pipelines full of toxins bound for BC along with the damn bitumen.. what a 'climate plan' with instant 'Remediation' eh ?

Thoughts n Prayers BC..
Jason Kenney.. among other political petro parasites..
sees BC as Alberta's septic tank.. I kid you not

These tar-benders and anti-carbon taxers just cannot be reasoned with, Mound. I recently saw a comment that seems most appropriate of them all: "Fossil fools meet Rapture".

But, we here in BC have a serious problem in that no one, even with the best of ideas, can convince Translink's Board to figure out a sensible way to get a transit system out to the Fraser Valley! We can't continue to tell ourselves that that wall of brown pollution, which is pretty well at Hope now, is all coming from Seattle.