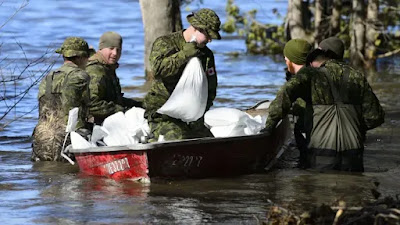 Canadian soldiers are stretched to the limit. They are the latest casualties of our climate emergency.

The country's top military commander says Canada's Armed Forces are being pushed to the limit responding to an increasing number of climate-related events such as floods and fires.

In 2016 the military responded to only one climate disaster, the wildfire in Fort McMurray. But that number jumped to six deployments in each of the following two years.

Gen. Jonathan Vance, the chief of the defence staff, says he needs more men and women to handle these crises and his soldiers need more training to deal with fires and floods.

Just this spring more soldiers were deployed to assist states of emergencies — during floods in Ontario, Quebec and New Brunswick as well as wildfires in Alberta — than were deployed overseas.

Yes, Vance, says he needs more soldiers. He is not saying but I'm sure he knows that climate breakdown will probably force some serious at home peace keeping.