On the Other Hand 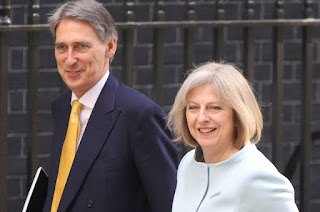 Britain's Chancellor of the Exchequer says switching to a zero-carbon reality by 2050 would cripple the UK economy to the tune of a trillion pounds. Of course, Philip Hammond, also warned that Tory backing for same-sex marriage would leave the Conservative party gored.

Hammond presumably imagines that Britain can have an economy even without a viable environment. He warns that the cost of fighting climate change would mean less money for schools and hospitals. Odd that a Tory would target those two, isn't it?  And it does sound as though Phlip doesn't factor in the economic activity that will result from a switch to clean, alternative energy.

My guess? I suspect the good Chancellor is neck deep in BP stock.

All that money is probably why he likes to say things like the following.....Announcing a change to public toilets, he said: 'I can say this is virtually the only announcement in this Budget which hasn't leaked'. The only leak here is his mouth. Anyong

You are missing the point Mound that low-carbon reality must be introduced world-wide. No cheating allowed by any nation. Good luck with that premise.