The Little Schit is At It Again. Scheer - Pipelines are "National Unity." 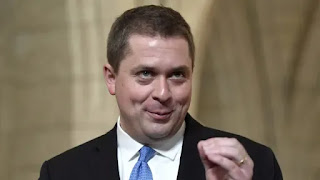 Despite those among us who vouchsafe Andrew Scheer, the Tory leader is a malevolent little schit. The latest proof is Scheer's attack on Trudeau, accusing the incredibly petro-friendly prime minister of betraying the West (or at least Scheer's notion of 'west') by implementing minuscule carbon taxes.


Scheer made the comments today before the Royal Glenora Club in Edmonton, while delivering the latest in a series of pre-election speeches setting out his policy objectives ahead of the October federal election.

"It's clear that every time there's a Trudeau in the Prime Minister's Office, our union begins to crack," Scheer said.

...He singled out the federal government's carbon pricing scheme — which imposes a carbon tax on provinces that do not have plans of their own to price carbon — as particularly divisive.

"Trudeau's carbon tax is a betrayal of Confederation's early promise," Scheer said. "The discord he has sown has prompted an unprecedented number of legal actions against his government coming from provinces frustrated at his overreaching."

I wonder how long before this is echoed in somebody's make believe "war room"?

This is not to defend nor praise Scheer's target, Justin Trudeau, who pulled a giant whopper out of his backside today to claim that his carbon tax, laughably minuscule as it is, is Canada's answer to fighting climate change.

“We need to be taking real action to prevent climate change. That’s why we’re moving forward on a price on pollution right across the country, despite the fact that Conservative politicians are trying to push back against that.”

Scheer is malevolent. Trudeau, well maybe he's only a neoliberal dimwit.
Posted by The Mound of Sound at 6:45 PM

“… every time there's a Trudeau in the Prime Minister's Office, our union begins to crack."

What’s that got to do with the price of oil (or bitumen)?

Was he in short pants or still in diapers when the NEP fairy tale was concocted?

.. its hard not to conflate this post with the 'Absolve This' post.. so I will. But its hard not to conflate Michael Cooper with Andrew Scheer.. tho physicallly they do seem somewhat opposite. Cooper will never resemble Stephen Harper physically, but Scheer appears to be adapting to and adopting the frumpy lumpy oversize clothes style to disguise the growing pot, fat legs & pasty pudge plus the smartest guy in the room closet genius pedagogue demeanor. The embedded ideology is so obvious though, however they mask or camouflage or wrap it..

I'm far, far from a student of political history.. 'the now' is what I'm all about.. what have you done for us lately.. or aim to do to us if you get the chance. That's how I've 'read' people all my life.. will to the last breath. I can forgive here and there.. or be forgiving.. but I never forget, never will.

So Scheer and Cooper to me, confirm a suspician I formed during the rancid Harper/Novak era of great deceits and conceits. The era of holier and smarter than thou mealy smarm. The Party does not shape the candidate or MP .. its quite the opposite. The Party is just the costume and entry pass to OUR archaic elections, tax monies, free media and astonishing wealth.. And its the Harper's Novak's Fantino's Del Mastro's, Cooper's, Scheer's that create & change the costumery and the fine print on the entry pass to OUR Parliament and to spend OUR money. Thus people who 'vote the party' are essentially voting for some vestigial outdated belief or flavor.. thus Canada seems to have 'safe seats'. Its odd that Michael Cooper's Edmonton riding is a safe federal seat yet the same essential riding provincially is held by the NDP & a woman ! Riddle me that !

But back to mr evangelical minestrone and pablum - Andrew Scheer with his pompous pronunciations and wearisome TV ads.. He favors the dress code of Harper of course.. those folksy cheap Italian table cloth checkered shirts, baggy khaki pants too long and blah & too big sports jacket. I find the guy so irksome and phony, so contrived and pedantic, I could barf. But Jason Kenney triggers the same instinct.. so does Cooper.. so do almost all of them. They're drawn to a Party that welcomes the bullshit artists, bullies, cowards & the shifty. Kouvalis certainly made a fine living off them and they've all made a fine living off of us.. If you relish an environment of incels, parasites, frothy faux christianity, closet gay 'virgins' or wienie waggers like Tony Clement.. walk right in and cash in like Mulroney did.. or McKay or Joe Oliver, Ambrose or Kellie Leitch, Rob Anders, John Baird.. Poilievre, Calandra, Van Loan.

If I was a Liberal strategist.. I would target Scheer and Cooper's ridings - door to door saturation door knocking.. break down the 'safe Conservative riding mythology.. force Scheer to shut up and get back to 'his' riding to defend against an onslaught of truth. He's suddenly a multi millionaire, not a native son at all.. I'd be shaking his tree so hard, forcing him into defending his bullshit and tripe. Hardball baby.. keep inviting him to town hall meetings he'd decline, where he does not set the agenda, the questions.. essentially shine such a harsh light on him and his bullshit that he squirms.. in public.. 'not ready, not real, not ever' .. he hints at doing away with old age pension and Canada Pension Plan.. explain that within his riding within 120 seconds and go sit down A-hole.. cameras rolling. If that jackass can't defend himself.. how can any of his coven of candidates do so.. strip him naked for who and what he is..just another frothy hyperpartisan zealot.. Amen eh

Let the memories flow. Try this out. Go down the list and put in your mind images of those characters, from Preston through to Scheer and Max, and tell me that you don’t have the feeling that you’ve been watching a cartoon. They make Mulroney look like a statesman.

"Every times there's a Trudeau. . ." Has he forgotten the October Crisis? He really is malevolent.

Trudeau! had a National Energy Plan that included Pipelines ( Elizabeth may agrees ). Alberta rejected sending oil east. I remember because I froze in the dark wondering who my father was.

Trudeau!! even bought a pipeline to please Albertans. They vilified him .
It seems that Albertans demand pipelines but hate pipelines at the same time. Not a unity crisis but an existential crisis.

Alberta will want "national unity" when solar and geothermal put the final nail in the coffin of tar sands exploitation. Then all the so called energy partners will flee en masse leaving the potentially half a trillion clean up bill for the province. Then they will sure want to be a part of Canada so the rest of us can shoulder the multi millennial restoration job. Unfortunately the way the climate and eco-systems are falling apart in real time we have no time left to act. According to some studies we might not survive as a species by 2050.

Andrew Scheer is one stupid man. Another German.