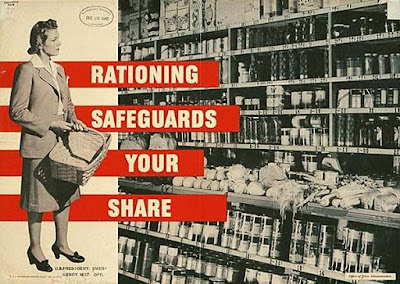 The Observer's Sonia Sodha freely admits she is a climate hypocrite. She wants action on climate change. She has even voted Green. But she just can't bring herself to do the heavy lifting personally. And she doesn't believe 'sin taxes' will solve anything either. Sodha argues there is another way that will work - rationing.

It’s naive to think that we can achieve these sorts of lifestyle shifts by imploring people to do more. I already know we’re fast approaching a catastrophic climate tipping point and yet I’m just not very good at forgoing a steak, particularly when I know plenty of others won’t be either. The power of nudge is also limited here: shoving the steak further down the menu isn’t going to make me less likely to order it. So public policy inevitably ends up with sin taxes as the go-to policy lever for trying to get us to switch away from the bad stuff.

Sure enough, a meat tax has been mooted. But the big problem with green taxes is that they hit the least affluent hardest. It’s people on low incomes who are most sensitive to marginal increases in the cost of their food and flights and who might decide they can’t afford their one holiday a year as a result. But it’s the very well-off who can much more easily absorb the cost of green taxes who do the bulk of the polluting: the richest 10% of households in the UK produce four times as many emissions as those in the bottom 50. That’s one reason why a jury set up by the Food Ethics Council rejected the idea of a meat tax last week.

But, perhaps counterintuitively, I think the inevitable rise of the climate hypocrite – as awareness grows of just how much destruction we are set to wreak on the planet, but people still can’t quite bring themselves to pass up a Sunday roast or the holiday at the end of that budget flight – is a cause for optimism. I want to do more, but I know I need someone to force me to take my carbon footprint more seriously. And perhaps that means people will become more willing to countenance something more radical, but fairer, than sin taxes: saying there’s only a certain amount of meat or air miles we’re going to consume as a population every year and once it’s gone, it’s gone.

...Rationing to tackle the climate crisis could be given a modern-day makeover. People could be allocated polluting credits to cover activities such as meat eating and flying that they can sell and buy in an online marketplace. If you’re short of cash, or not that bothered about eating meat or flying abroad, you can feel smug as you sell your credits to someone who is, which makes this far more equitable than green taxes. And setting a population-level limit on something such as meat consumption would create huge incentives for companies to invest more in the production of things such as environmentally friendly, lab-grown meat.

Which brings us back to my "lifeboat" model for a post-growth world. As we continue to run out of stuff, we will need to find a new way of distribution other than the existing monetary allocation model. Failing to implement a workable form of equitable allocation could be disastrous when social cohesion is already wobbly.


I've read it, TB. I bought it when it was released. But it's not Monbiot's idea. It has been around for a long time.

I will believe in rationing when those who feel that are "entitled to their entitlements" will change their stance.
No point of mentioning their names.

This is Mark Jaccard's main point.
(A BC prof on the IPCC.)
Taxes (ie carbon taxes) could work but they are politically unsustainable.
He calls for "regulations" instead of taxes. (And points to the success of that model for ex. CFCs.)
Rationing are a form of regulation ....


I wouldn't worry about rationing any time soon. That would require leadership qualities that we haven't seen in decades - knowledge, vision, courage. When people enter politics for the sole purpose of being in politics, for their own advancement, then the nation and the populace must pay the price.