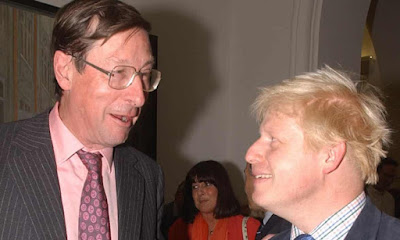 Six years ago, the Cambridge historian Christopher Clark published a study of the outbreak of the first world war, titled The Sleepwalkers. Though Clark is a fine scholar, I was unconvinced by his title, which suggested that the great powers stumbled mindlessly to disaster. On the contrary, the maddest aspect of 1914 was that each belligerent government convinced itself that it was acting rationally.

It would be fanciful to liken the ascent of Boris Johnson to the outbreak of global war, but similar forces are in play. There is room for debate about whether he is a scoundrel or mere rogue, but not much about his moral bankruptcy, rooted in a contempt for truth. Nonetheless, even before the Conservative national membership cheers him in as our prime minister – denied the option of Nigel Farage, whom some polls suggest they would prefer – Tory MPs have thronged to do just that.

...A few admirers assert that, in office, Johnson will reveal an accession of wisdom and responsibility that have hitherto eluded him, not least as foreign secretary. This seems unlikely, as the weekend’s stories emphasised. Dignity still matters in public office, and Johnson will never have it. Yet his graver vice is cowardice, reflected in a willingness to tell any audience, whatever he thinks most likely to please, heedless of the inevitability of its contradiction an hour later.

...Johnson would not recognise truth, whether about his private or political life, if confronted by it in an identity parade.  ...Almost the only people who think Johnson a nice guy are those who do not know him.

...We can scarcely strip the emperor’s clothes from a man who has built a career, or at least a lurid love life, out of strutting without them. The weekend stories of his domestic affairs are only an aperitif for his future as Britain’s leader. I have a hunch that Johnson will come to regret securing the prize for which he has struggled so long, because the experience of the premiership will lay bare his absolute unfitness for it.

If the Johnson family had stuck to showbusiness like the Osmonds, Marx Brothers or von Trapp family, the world would be a better place. Yet the Tories, in their terror, have elevated a cavorting charlatan to the steps of Downing Street, and they should expect to pay a full forfeit when voters get the message. If the price of Johnson proves to be Corbyn, blame will rest with the Conservative party, which is about to foist a tasteless joke upon the British people – who will not find it funny for long.

and they should expect to pay a full forfeit when voters get the message
We can hope...


For the British people, who pride themselves on their calm blandness, to wind up ruled by this flamboyant narcissist is difficult to grasp. After all it won't be the people speaking but the 300-odd Tories, real establishment types, who will install Boris in No.10. It does feel a little creepy.

On BBC last night, they spoke about Boris being a different man in private than in public and what does that have to do with his ability to govern. Another Trump perhaps. When a man beats up on a woman mentally or physically, he is nothing but a raving coward and has all the makeup of being a tyrant period anywhere at any time.


I suspect you're right, Anon. Those two do share some pretty ugly traits.