The Same Old Song? No, Not Really. 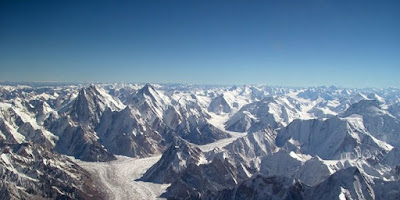 We're barraged with reports about the loss of Arctic sea ice, the threat to the Antarctic ice pack, the melting of the Greenland ice cap, the retreat of glaciers around the world. We get it. This time, however, it's the Himalayas and that's in a league of its own.

Himalayan glacier melting has doubled since 2,000. So what? The "what" is really "which." Which nations are dependent on the Himalayan headwaters for their very survival. There are three - China, India and Pakistan. Three countries that desperately vie for access to those waters. Three countries that maintain nuclear arsenals and eye each other with grave suspicion.

The melting of Himalayan glaciers has doubled since the turn of the century, with more than a quarter of all ice lost over the last four decades, scientists have revealed. The accelerating losses indicate a “devastating” future for the region, upon which a billion people depend for regular water.

The analysis shows that 8bn tonnes of ice are being lost every year and not replaced by snow, with the lower level glaciers shrinking in height by 5 meters annually. The study shows that only global heating caused by human activities can explain the heavy melting. In previous work, local weather and the impact of air pollution had complicated the picture.

Joshua Maurer, from Columbia University’s Lamont-Doherty Earth observatory, who led the new research, said: “This is the clearest picture yet of how fast Himalayan glaciers are melting since 1975, and why.” The research is published in the journal Science Advances.

...A landmark report published in February found that at least a third of the ice in the Hindu Kush-Himalaya ranges was already doomed to melt by the end of the century, even if drastic action to cut emissions was taken immediately. Without action, two-thirds would go.

Either way, serious consequences will be felt by those who rely on the great rivers that flow from the peaks into India, Pakistan, China and other nations. “It’s the climate crisis you haven’t heard of,” said Philippus Wester, at the International Centre for Integrated Mountain Development, who led the February study and said the new work was very convincing. “Increasingly uncertain and irregular water supplies will impact the 1 billion people living downstream from the Himalaya mountains in south Asia.”

...[Columbia prof. Joerg] Schaefer said: “For the wellbeing of the people there, our results are of course the worst possible. But it is what it is, and now we have to prepare for that scenario. We have to worry a lot, because so many people are affected.

“To stop the temperature rises, we have to cool the planet,” he said. “We have to not only slow down greenhouse gas emissions, we have to reverse them. That is the challenge for the next 20 years.”

The prescription, rapidly cooling the planet, means geo-engineering. That would entail a massive, man-made intervention to alter the climate over the Himalayas, something that many scientists predict would inflict catastrophe on other regions of Earth. Some in the Western military contend that likely would mean war, possibly world war.

Back in the early 1970's the Vancouver Planetarium hosted a lecture on what was then called the "greenhouse effect." While it was principally about carbon-dioxide the talk included a variety of issues. They ended with the premise that our Earth is a garden planet and that, ultimately, the worst pollutant may be heat.

Gywne Dyer talked about the military consequences of global warming decades ago. No one was paying attention. It seems that some are now re-considering his predictions.

"A billion people will be affected..." That's 30 times more than the population of Canada! Can you imagine the housing problem Vancouver would have with a population of 30 million? (More or less)