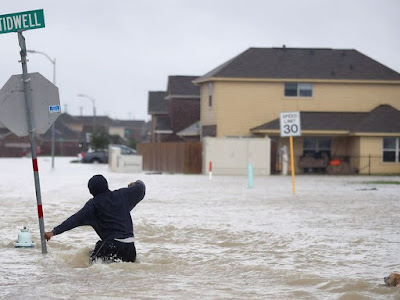 It's happening, right before our eyes, across America. Imagine you've been savaged by clusters of tornadoes, heavy rain has swollen your rivers to overflowing, your planted farm fields lie beneath inches of rain and now you're told to brace for days of heavy rainfall, a deluge that can reach anywhere from one to three inches per hour. A foot or more of rain expected through the weekend.


A pocket of severe thunderstorms will affect the central Gulf coast into the weekend.

A small number of these storms may produce a tornado. Cities at risk for a tornado strike include New Orleans; Gulfport, Mississippi; Mobile, Alabama; and Pensacola, Florida.

To complicate matters, heavy rainfall over the Central states and melting snow from the Rockies has created a surge of water from the Missouri and Arkansas rivers that is emptying into the Mississippi River and flowing southward.

Over the lower part of the Mississippi Valley, this surge of water may occur at nearly the same time that heavy rain falls.

The combination thereof could result in record-challenging high water on the lower Mississippi River, especially where the water levels are not mitigated by spillways toward the middle and into the latter part of June.

And what of the farmers? It's getting almost too late to plant corn and, as for soya beans, that crop is also in doubt.

Bad as all this may be for the United States, it's worse in countries to the south. I read a report yesterday that looked at a mother in Guatemala who says her last remaining son has just two choices - stay and die of famine as his brothers did or at least try to get to refuge in the United States. Her husband is dead, her sons, save one, are dead, her crops have failed and she's about to lose the family farm. Meanwhile Trump's America is manning the ramparts, prepared to repel boarders fleeing the very chaos that the developed world bequeathed to these vulnerable nations with their little brown people.

This dovetails with an opinion piece by Fintan O'Toole that I posted yesterday that examined how Americans are being groomed for fascism:


...You have to undermine moral boundaries, inure people to the acceptance of acts of extreme cruelty. Like hounds, people have to be blooded. They have to be given the taste for savagery. Fascism does this by building up the sense of threat from a despised out-group.

...Trump’s claim ...that immigrants “infest” the US is a test-marketing of whether his fans are ready for the next step-up in language, which is of course “vermin”. And the generation of images of toddlers being dragged from their parents is a test of whether those words can be turned into sounds and pictures.

...Fox News mouthpieces outdid themselves in barbaric crassness: making animal noises at the mention of a Down syndrome child, describing crying children as actors. They went the whole swinish hog: even the brown babies are liars. Those sobs of anguish are typical of the manipulative behaviour of the strangers coming to infest us – should we not fear a race whose very infants can be so devious? Second, the hardcore fans loved it: 58 per cent of Republicans are in favour of this brutality.

...The blooding process has begun within the democratic world. The muscles that the propaganda machines need for defending the indefensible are being toned up. Millions and millions of Europeans and Americans are learning to think the unthinkable. So what if those black people drown in the sea? So what if those brown toddlers are scarred for life? They have already, in their minds, crossed the boundaries of morality.

I suppose it really shouldn't come as much of a surprise that the ravages of climate change open a window into our inner fascism, instincts more widespread than we imagine.

There doesn't seem to be anywhere safe especially when Climate Change really begins to do the worst damage. Anyong

I watch a half-hour of American news every night, Mound, and the mounting toll of climate change should be obvious to all, even the most ideologically obdurate. I often wonder, since so much damage is being wrought in the American heartland, whether their current and increasingly dire situation has any impact on their antediluvian views.


As I've said for some time I expect we will see the climate crisis really transform over the next decade. We know that the next four years will be unduly hot and, if Camilo Mora's team at the University of Hawaii are correct, this will coincide with the arrival of "climate departure."

What I worry about is crop failures in two or more of the major grain producers. With a 60-day global reserve on hand we're already close to the edges.

Last night, Knowledge Network ran "The Age of Consequences." "US military insiders provide insight into how climate change and the increasing scarcity of natural resources impact stability in the world's most volatile regions."

This is the first time I've seen on TV what Gwynne Dyer was talking about years ago. This message still hasn't reached the big networks; it's probably too rough for the advertisers.

As to storms in the US, we can expect to see many American climate refugees try to move to Canada. What is Trudeau going to say about that? Neither the RCMP nor the Canadian military are prepared for mass migrations at our borders.

As to storms in the US, we can expect to see many American climate refugees try to move to Canada. What is Trudeau going to say about that? Neither the RCMP nor the Canadian military are prepared for mass migrations at our borders.

Build a friggen wall!! LOL.
It should be built with Canadian lumber and the USA should pay for it, softwood tariffs or no.
On the plus side the American climate refugees could provide cheap labour for our agricultural industry not to mention the idea of having a cute American with a bronx accent as a gardener or house cleaner.
We should consider the thought a gift!

FWIW, Gwynne Dyer is a visionary.

The White House (Trump) response to this catastrophe; kill the messenger, of course.
https://www.rawstory.com/2019/06/busted-white-house-caught-blocking-intelligence-aides-testimony-on-a-possibly-catastrophic-disaster/
Mac

Human greed will be the death of us all. Capitalism run amok. Gotta grow that GDP. Build more condos. Let's bring in millions of immigrants from low carbon footprint countries so they can have a McMansion and 3 cars too! Who cares about the environment, let's fly around the world to take selfies to post on social media. Overpopulation? Bah who cares if Africa balloons to 3 or 4 billion people?

Sorry if I sound bitter. I'll take my electric scooter for a ride with my reusable water bottle... *sighs*

The March of Folly continues.

So much for famine and poverty among migrants and their brutal treatment:
https://www.bbc.com/news/world-us-canada-44578339

Toby - thanks for the link. I finally managed to watch the documentary.