Forget About the Long Term. We Might be Lucky to Reach the Mid-Term. 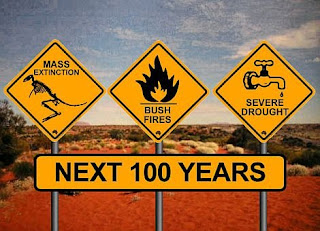 By 2050 human civilization, as we've known it, could be over. That's the conclusion of an Aussie think tank in a report written by a former fossil fuel executive and backed by the Australian military's former chief of staff.

The analysis, published by the Breakthrough National Centre for Climate Restoration, a think-tank in Melbourne, Australia, describes climate change as “a near- to mid-term existential threat to human civilization” and sets out a plausible scenario of where business-as-usual could lead over the next 30 years.

The paper argues that the potentially “extremely serious outcomes” of climate-related security threats are often far more probable than conventionally assumed, but almost impossible to quantify because they “fall outside the human experience of the last thousand years.”
On our current trajectory, the report warns, “planetary and human systems [are] reaching a ‘point of no return’ by mid-century, in which the prospect of a largely uninhabitable Earth leads to the breakdown of nations and the international order.”

The only way to avoid the risks of this scenario is what the report describes as “akin in scale to the World War II emergency mobilization”—but this time focused on rapidly building out a zero-emissions industrial system to set in train the restoration of a safe climate.

The scenario warns that our current trajectory will likely lock in at least 3 degrees Celsius (C) of global heating, which in turn could trigger further amplifying feedbacks unleashing further warming. This would drive the accelerating collapse of key ecosystems “including coral reef systems, the Amazon rainforest and in the Arctic.”

So, what's the end game?


Some one billion people would be forced to attempt to relocate from unlivable conditions, and two billion would face scarcity of water supplies. Agriculture would collapse in the sub-tropics, and food production would suffer dramatically worldwide. The internal cohesion of nation-states like the US and China would unravel.

“Even for 2°C of warming, more than a billion people may need to be relocated and in high-end scenarios, the scale of destruction is beyond our capacity to model with a high likelihood of human civilization coming to an end,” the report notes.

And the Top Brass concur.


In the briefing’s foreword, retired Admiral Chris Barrie—Chief of the Australian Defence Force from 1998 to 2002 and former Deputy Chief of the Australian Navy—commends the paper for laying “bare the unvarnished truth about the desperate situation humans, and our planet, are in, painting a disturbing picture of the real possibility that human life on Earth may be on the way to extinction, in the most horrible way.”

Spratt told Motherboard that a key reason the risks are not understood is that “much knowledge produced for policymakers is too conservative. Because the risks are now existential, a new approach to climate and security risk assessment is required using scenario analysis.”

Pay me now or pay me later, and later is now. Nothing else we stew over seems to matter in view of this set of problems. Totalitarian systems are probably better situated to respond. I wonder what private arrangements are being made between their élites and ours as their interests continue to converge.


John, the elite are said to live in fear. A prof (I'll have to remember who) got an invitation to address an audience on the future. I recall it paid $80,000 and he jumped at the chance. He prepared his address but showed up to find himself at a lunch with an audience of three hedge fund managers who wanted to grill him. They wanted to know what awaited in a world in which money was meaningless. How could they keep their own security from turning on them for their assets if dystopia arrived. This is what these people foresaw in their own future. How fucking dark is that?