This Election Is For Keeps 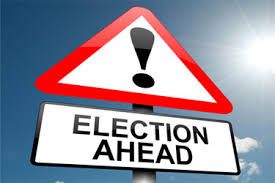 I can't stress enough that the October elections will be like none other in Canada's history. It's our last chance to steer Parliament away from its blind obsession with the economy and its pursuit of perpetual exponential growth and instead toward what the survival of our nation and our people demands.

If you vote Liberal or Conservative there'll be no change. We'll be back to business as usual, fiddling while Rome burns.

Sounds like utter hyperbole, doesn't it? If you think that, read this from Business Insider, "18 signs we're in the middle of a sixth mass extinction."

We are in a climate emergency, an existential emergency. We need leaders of Churchill's stature, the man who said, "Sometimes it is not enough to do our best; we must do what is required."

Andrew Scheer has no interest in doing what is required. As for his rival, the incumbent, he's the guy who bought the pipeline.
Posted by The Mound of Sound at 6:34 PM

Add the monument to diversification at all odds from the NDP; errrr what his name?
Talk about Nero fiddling whilst Rome burns and we have not only no opposition but no alternative viewpoint with any chance of effecting change.
It's difficult to imagine Liz May and ( my vote)and Paul Manly saving the world.
It will take a radical approach to make the changes needed in this world.
Sadly we have no radical leaders amongst us.

I still have to believe that we can effect a real change by not voting for the Libs or Cons. People will get the message that support of the establishment is eroding and at least we can have the satisfaction that we have tried. Get a conscience and vote Green.

I hear you loud and clear. Despite the hyperbolic nature of the call to action, there is truth to it.
The only problem? I'm not going to vote for any of the mainstream parties because their special interest groups are all bent on driving us into the abyss. Even the Greens show signs of weakness (May has promised to *only* use Canadian 'oil', which makes me question her judgement), but they are ultimately the only logical choice.
We need to surprise the world with a Green upset and steer away from the cliff.
LY

Recent court decisions demonstrate the importance of good judicial appointments.
For 10 years, Harper filled the open positions with the likes party hacks and racists.
The best thing Jr. has done is improving the judicial (and Senate, boards etc) appointment process.

That said, because of the many unforgivable betrayals.....
* electoral reform
* cannabis 'legalization' (actually corporate criminalization)
* worst foreign policy ever (actually worse than Harpers)
* hijacking infrastructure into PPP
* abandoned their tax reforms allowed the special interest groups to win and give tax-reform a bad name
* and yes, climate schizophrenia on steroids

I'll likely throw caution to the wind and vote Green this time even though I expect it will be effectively a 'protest vote' and could even help enable a CON win.

The worst a voter can do is to stay home because it tells the winner that you don't care. Since you don't care the ruling party can do whatever it wants.

At the very least, voting Green sends a signal that you do care. Voting Green tells the winner that you care about climate breakdown. Voting Green says you have lost faith in the established parties.