How F#@ked Up Is America? 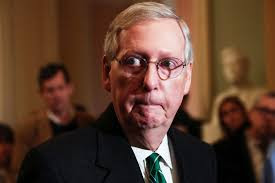 Leave Trump out of this. The face of the Republican Party today is Senate Leader Mitch McConnell, the most unprincipled, underhanded and shameless deviant in Congress.

The House is now grappling with the question of whether the descendants of black slaves should receive compensations for America's 'original sin.' No matter what the House concludes, it'll be a non-starter if it ever comes to the Senate.

What does the Alabama-born, Mitch, currently the senior senator for Kentucky, think about the slavery debate? He argues that America paid for the 'sin of slavery' by electing Obama.

"We tried to deal with our original sin of slavery by fighting a Civil War, by passing landmark civil rights legislation, elected an African American president. I don't think we should be trying to figure out how to compensate for it."

It was half-jokingly said that, if Obama wanted the support of Congressional Republicans it would have to be for the repeal of the 13th Amendment. Half-jokingly.

McConnell, like Trump, knows the truth of what Lyndon Johnson said. “If you can convince the lowest white man he’s better than the best colored man, he won’t notice you’re picking his pocket. Hell, give him somebody to look down on, and he’ll empty his pockets for you.”

McConnell knows that's true. He banks on it every day. It is now the credo of the Republican Party.
Posted by The Mound of Sound at 12:08 PM

McConnell believes that the Civil Rights Act and the Voting Rights Act were mistakes. And he has devoted his career to undermining both.

.. I've maintained for quite a while, that Mitch McConnell is one of the Top Five most diseased men in North America. He's in exalted company among Donald Trump, Sean Hannity, Stephen Miller, Alex Jones, Jeffrey Epstein .. below them, the rest are deserving and loud scumbag wartlings.. and it always impresses me how Canada's ReformaTory moral weaklings eagerly wish to emulate them, hell, embrace them.. in thought, deed & empty ethics..

This all goes back to the Goldwater Pivot - when the GOP decided that honesty was secondary to power.

It is often said that power - at whatever level - corrupts, but the GOP has taught us that the corrupt are drawn to power, however it must be obtianed.

While the democrats sit on their hands and avoid the obvious with Trump, they also ignore that getting McConnell (and numerous other clapping seals) out of the senate is every bit as important, if not more. Doesn't matter who occupies the oval office chair on Jan 21, 2021, this sleazeball will obstruct, obstruct and obstruct some more and the country will be in the same shambles it has so gloriously achieved through the last 40 years.

Perhaps you never announced or even realized this, Mound.. (unlike Biden and the Russian-obsessed Dems, alas) the tone and content of your posts say you've moved on from
"they'll impeach tRump any minute now"
to
He's simply the GOP w/o manners.

Also ... (and it hurts me to say this)
in the murky world of the USA today, tRump is a brilliant politician.