What if Putin Is Right? What Then? 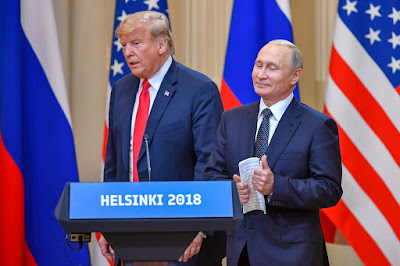 Before flying off to Osaka, Russian badboy Vlad Putin took a moment to share his views on democracy and its troubled and tattered trappings.

The Russian leader also praised the rise of populism in Europe and America, saying ideas like multiculturalism were "no longer tenable".

"[Liberals] cannot simply dictate anything to anyone," said Mr Putin, who is on his fourth term as president.

...Mr Putin criticised the approach of some Western governments, and specifically mentioned immigration, multiculturalism, and LGBT issues - so he seems to be focusing on social and political liberalism.

He's not the only world leader who doesn't like the term either - Hungary's Prime Minister Viktor Orban has specifically said he wants to create an "illiberal state" because he believes authoritarian systems, like those in China and Russia, work better than Western liberal democracies.

So... is liberalism out of date?

Liberalism had been seen as the "norm" in many countries until recently.

However, a lot of people do believe it could be in decline - as evidenced by support for Brexit in the UK, or support for populist leaders including Donald Trump in the US, or Matteo Salvini in Italy.

"Clearly the kind of liberal order we had until 2008 is in trouble," Michael Cox, a professor of international relations at LSE, tells the BBC.

He says that the financial downturn in 2008 was a "major turning point", and globalisation and the fact that "markets were allowed to determine everything" also brought about "larger questions of identity and culture, with people feeling that their country is no longer their own".

When Justin Trudeau came to power in 2015, I briefly hoped that he would focus on restoring Canada's flagging democracy. This blog, after all, is expressly dedicated to the "restoration of progressive democracy" in Canada. Trudeau seemed to grasp that the key to rehabilitating democracy was to put an end to first-past-the-post elections in which a minority of less than two in five voters, only some of them even vaguely interested in the issues, resulted in "false majority" governments that rule rather than 'govern with the informed consent of the public'. A false majority with an equally false mandate.

Of course, once installed in office, Mr. Trudeau saw that first-past-the-post might well deliver him a second false majority in 2019 and he promptly balked at electoral reform. That was then, this is now, and we find ourselves instead in a predicament where Trudeau's failure to honour his election reform promise may be just what Andrew Scheer needs to snatch a false majority in October with an equally false mandate.

In the era of neoliberalism, governments of liberal democracies have done a truly shitty job of protecting democracy and upholding liberal values that are too often sacrificed to the market place in the blind pursuit of perpetual exponential growth. The liberal democracy that is delivered is unpalatable to a populace that feels insecure, irrelevant. That is what propels people like Trump and Orban into high office.  These people are testament to liberal democracy subverted from within.

Notice that the libertarians are now pandering to a class of voter created in reaction to the policies for which they were once the loudest promoters. Take this comment from a supporter of our favourite home-grown rugged individualist, Max Bernier:

“He's the only politician talking about tearing up deals with the U.N., including that ‘non-binding’ Global migration scam.”

Or just take anything that comes out of the Repugs in the US. Our CRAP Party is a little more timid but isn’t too far behind. Though they screw it up at times, that measured approach has something to do with the residue of Harper’s presence and his understanding of political “evolution”. The man himself should be of distant bad memories but he’s still talking “about things about which he knows fuck-all about”; and yes, he’s still “evolving”.

I have to ask whatever happened to the idea that “economic freedom demands the unrestricted movement of human as well as financial capital across national borders.” Every business course I ever took was drenched in market-libertarian bullshit and always included a series of browbeating lectures on the virtues of “diversity”. Times sure have changed, haven’t they? Now one of their political practitioners has gone so far as to fuck our minds by relabelling that thing that used to be so wonderful as “extreme multi-culturalism”.

Does anyone else think that they all might have been fibbing and, if so, have they stopped?


Why would they stop fibbing when it has worked so well this far?

To be fair authoritianism seems to be on the rise on the left too, just look at all the comedians who are afraid to do shows on college/university campuses, or the jerks that deplatform anyone they disagree with, or the twitter mobs that try and get professors like Camille Paglia fired.

Support for freedom of speech is shockingly low across the political spectrum, its a massive crisis.

Advocating the use of free markets in areas, such as health and education is misplaced because by nature these are public services, which are not subject to the same profit motivation. Also, the free market ignores the externalities of health and education. Adopting a free market approach can lead to widening inequality and under-provision of an institution important for long-term investment in the economy.speculative, hot money) from capital deregulation have not necessarily helped economic development, but instead have contributed to increased financial instability, which has caused wider economic shocks, e.g. post 2007 credit crunch. (Dell’Ariccia and others, 2008; Ostry, Prati, and Spilimbergo, 2009)Neo-liberal policies tend to increase inequality. But, this inequality can harm long-term growth prospects. Those with low-income have limited spending power and those who become richer have a higher marginal propensity to save, so wealth doesn’t ‘trickle down’ as some hope. These are some of the problems with neoliberalism..that is what Putin needs to hear. Anyong

Nothing like tossing political terms around. Good old Don Tusk holds an UNELECTED position, appointed by the EU council as per the Treaty of Lisbon and hasn't much power. If Merkel or Macron don't like what the bureaucrats like Tusk and the council get up to, he and they are sunk and cannot coutermand them, just squawk. He's the world's most highly placed bureaucrat whose role it is to be a political person, a double dose of wacko-ness and dystopia. But that's the EU for you.

Who are "all the comedians" afraid to do campus shows? Bill Cosby? Louis CK? Michael Richards? Gee, I wonder why!

People have been inconveniencing public speakers since jebus harassed the money changers outside the temple. Free speech cuts both ways and has never guaranteed a right to be heard. There is no free speech crisis, at least not here. If you want to see a crisis of free speech look at China, Russia, Egypt and Saudi Arabia. A few campus hot heads will never even come close to that.

A country for everyone is a country for no one. Canada is quickly becoming a hotel and shopping mall. A post national state if you will, with no mainstream identity.

Putin is right. Liberal democracy is rotten to the core. From multiculturalism and mass immigration to growing the GDP at whatever cost- the environment be damned.