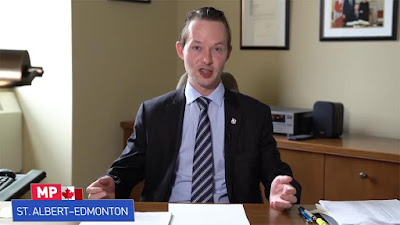 A certain former Liberal, by his own account a Liberal of some past prominence, has gone out of his way to vouchsafe that Andrew Scheer is not even a bit racist. Nor, apparently, is Scheer's party, despite what they do and what they say.

Until he stepped in it, Scheer's handpicked vice-chairman of the Commons Justice Committee was a pencil-neck from the St. Albert-Edmonton riding, Michael Cooper. Just what was Cooper doing on that committee and its hearings now underway into online hate?

PressProgress posed the question today when three witnesses were called to give evidence.

Liberal MP Iqra Khalid and the office of NDP MP Tracey Ramsey both confirmed to PressProgress that none of the three witnesses were invited on behalf of anyone affiliated with their parties, but declined to comment further.

The office of Conservative MP Michael Cooper did not respond to multiple requests from PressProgress asking if he was involved in inviting Steyn, Robson or Shepherd.

The JCCF is headed by John Carpay, a close ally of Alberta Premier Jason Kenney who made headlines after he compared the rainbow flag to the swastika. Shepherd’s group spearheads legal challenges on anti-abortion and anti-LGBTQ issues.

Last month, Shepherd participated in a discussion about “population replacement” and “white genocide” on a white nationalist YouTube channel.

Rhetoric about the “replacement” of whites is common among Europe’s far-right, a concept popularized by a far-right conspiracy theory that falsely claims a shadowy cabal of global elites are deliberately replacing whites with Muslim immigrants.

The manifesto of the far-right terrorist in New Zealand was also titled “the great replacement,” and echoes many of the same themes.

And what about Scheer's eventual replacement, the next federal Tory leader, Jason Kenney? Kenney, the unlikely homophobe?

Well, he might not be a Nazi, but the Nazi’s think he’s a Nazi.

How is it a surprise that the CPA and UCP have a Nazi Problem?

He hires staff from racist organizations. He signs nomination papers for racists. He shields recruits from their biozo eruptions. He attends racist events. He gets selfies taken with racists. He appears in the media with racist commentators. But he's not a racist. Sure.