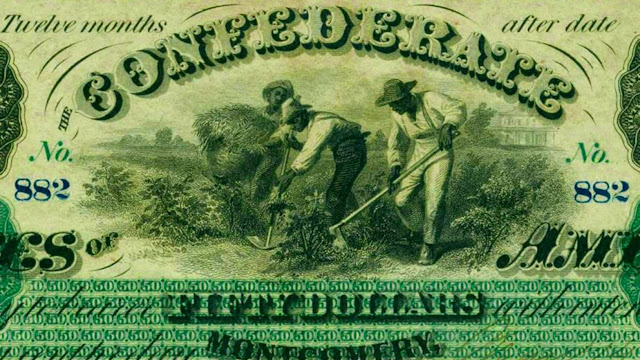 "History does not repeat itself but it rhymes." It's a line often attributed to Mark Twain. No matter, it passes the test of time.

It feels like we're in one of those moments in Canada today. And, to me, Canada today sort of rhymes with the United States in 1860. It was the Slave States then and it's the petro-provinces here today.

Is it mere coincidence that the 19th century slavers and our 21st century bitumen pimps use similar arguments?  The slavers and the pimps meticulously avoid the moral argument that they know is unwinnable. Instead they put forward the economic argument, dubious as it was then and is now, conveniently wrapped in the emotional flag of "state's rights" or, in our case, provincial rights. Although the slavers were an elite minority, they harnessed most of the white population of these states to their cause, a testament to the power of inculcated grievance. The slavers eventually invoked secession. Ours, for now, merely hint at it.

The slave states pushed their luck but they did it knowing they had considerable support for their vile, inhumane economy on Capitol Hill in Washington. Our petro-premiers know they too have plenty of support in Ottawa, a Parliament divided. They've even got their very own Rebel Media (and PostMedia) banging their drum, whipping up their plebs.

A piece in yesterday's NatPo carried the headline:

'It’s not Canadian to do this': Thousands rally as federal resource bills, pipeline delays roil the West.

It's not Canadian? Who says? Are there, perhaps, two incompatible Canadas wrestling to see which will prevail? It sure sounds like it.

With a federal cabinet decision looming on the Trans Mountain pipeline expansion, the pro-energy industry advocacy group Canada Action convened the rally, perhaps 4,000 people strong, to show support for the project and lay into two pieces of legislation that have become the focal points for the anger roiling the West.

The pipeline expansion has been mired in delays since a Federal Court of Appeal decision last summer voided the project’s approval. Add to that Bill C-69 and C-48 — respectively, they propose to re-jig the pipeline approvals process and ban oil tanker traffic off the west coast of British Columbia — and there was enough fodder for all manner of protest signage, speeches and chants.

“As long as there is breath in my body we will never stop defending these industries,” Saskatchewan Premier Scott Moe told the crowd Tuesday. Moe’s was one of six governments — the others those of Ontario, New Brunswick, Manitoba, Alberta and the Northwest Territories — that sent a letter to Prime Minister Justin Trudeau Monday urging him to “refine or eliminate” those bills. The five provinces, now all governed by conservatives, have formed a vocal and coordinated resistance against the federal Liberal government of Prime Minister Justin Trudeau, most pointedly on energy and carbon taxation — issues that have further stoked anger and distrust towards Ottawa under the Liberals, and that may define this fall’s election.

I don't want their Canada on my conscience. If that's what Canada must be, count me out.
Posted by The Mound of Sound at 12:43 PM

Canada Action and many of the others are astroturfs funded by domestic and foreign oil corporations.

All told they have about 120,000 Facebook followers, when you cross off all the duplicate accounts, Corporate Sockpuppets and Bots, Americans , Russians and Sawdi sockpuppets and bots, and Nazi’s trolling for the gullible wingers easy to radicalize.

Yellow Vests Canada doesn’t really give a rats ass about oil and gas, they are just Nazi’s who have found a “cause” that allows them to whitewash their bigotry and ROHA dreams.

United Roll was an excellent means of grifting racist wipple.

Between all of them, they could only get a tiny fraction of the wipple out onto the lawn at the House than National Yoga Day.

It’s nice the NaPo is pretending that they are a Movement.

It’s nice that the MSM pretends they are legit movements and never covers the fall out.

The Carbon Industry and their Financial Backers know they have less than a decade to “fix in place” fossil fuel infrastructure before Climate Change hits everyday lives so hard that new projects become impossible,

and they have willingly teamed up with the worst people in our society to make it possible.

They are walking us to our graves with their eyes wide open.

“A network of lobbyists, politicians and campaign groups is pushing the UK towards a hard-Brexit, with the aim of axing environmental protection in the name of free-market ideology.

Powerful vested interests are at play, with a network of decision-makers and companies that profit from climate inaction overlapping with a cabal of climate science deniers eager to limit global action to cut emissions.

Over the past four years, DeSmog has been tracking this network. We’ve now mapped over 2,000 connections between its actors operating at the highest levels of political and corporate life in the UK, US and Europe.”

So, the goal by the Politico’s and Billionaires is Disaster Capitalism on a global scale.

It is difficult to believe Jason Kenney said to the poorest province in Canada, New Brunswick, that he would buy NB hydro power while looking for their support regarding Bitumen West while talking about Energy East. That is nothing but double speak. I can no longer find the broadcast in which Kenney said this. Not only that, he also said words to the Effect, if NBer's wanted to have their young people to return home, it was in their best interest to support Bitumen Energy East.