How Canada Claimed the Pole 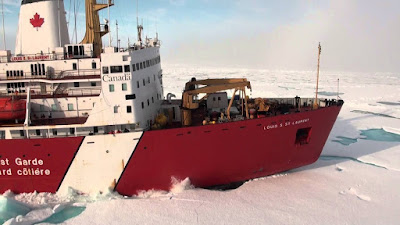 Just in time, Canada has produced research backing our claim to the North Pole. And they got that research aboard a Coast Guard ship, the Louis St. Laurent. From Canadian Press:

All coastal nations claim 200 nautical miles off their shores as exclusive economic zones.

Beyond that may lie something call the extended continental shelf. If a country can prove that the shelf exists off its coast and that it's connected to the country's land mass, it can be claimed.

Peering through sometimes thousands of metres of icy water to prod the bottom beneath was what [Canadian scientists] on the Coast Guard's Louis St. Laurent were trying to do.

The task was large and time was short. The science agenda was packed and almost every hour of the cruise was accounted for.

Researchers looked at the thickness and origin of sediment layers.

They made precise measurements of water depth.

They considered the type, age and structures of rocks hauled from the deep. "They're so precious they're like moon rocks," Dickson says.
They reconstructed how the modern sea floor was built from ancient tectonic plates.

They compared the rocks they were finding with data collected on High Arctic islands.

"It all pulled it together in making a complete package and, I think, convincing arguments as to why this continental margin is part of the land mass," Dickson says. "It's connected to the Canadian continental margin off of Ellesmere Island — physically connected."

All this happened through ice so tough it sometimes stymied two icebreakers and so unpredictable the team lost two locator beacons when the ice pan they were on drifted away. They were recovered nine months later east of Greenland by the Danish navy.


Denmark and Russia have filed competing claims.
Posted by The Mound of Sound at 9:42 AM

Hopefully, questions will put off the final carving up . The only reason anyone is interested is oil. Noone needs more oil production with its inevitable warming and oil spills.


China also has its sights on the vast resources of the Arctic ocean seabed. Beijing has demanded standing as a "near Arctic nation" even though it is several hundred kms. from the Arctic. Worse yet the Chinese contend the Law of the Sea doesn't apply to the Arctic suggesting it may not recognize the rightful claims of the genuine Arctic nations.

Thinking further, what happens if Russia has a shelf that meets the Canadian shelf? Do negotiations go back to coast length and Denmark becomes the big winner and the US the big loser. ? Maybe size really is important. Expect Canada to argue that the circumference of each island and the US to join Russia in claiming that only continental shoreline counts. What is the circumference of Greenland ?

This is going to take a while.

Russia does have a shelf and it was on the basis of that they planted a Russian flag on the sea bed at the North Pole. Perhaps if the shelves adjoin we could build a lovely causeway to Russia.