Don't Worry, Mike. They'll Move All Right. They Surely Will. 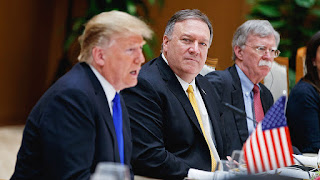 Trump's secretary of state, Mike Pompeo, is a bright guy. First in his class at West Point, JD from Harvard Law School. At times, however, Pompeo can sound downright dumb.

Mikey goes wobbly when it comes to discussing climate change. Now, as secretary of state, he might be expected to stay on top of climate developments, especially given that it is recognized by the Pentagon and other agencies as a powerful destabilizing force that is already impacting vulnerable nations.

"The climate's been changing a long time. There's always changes that take place," Pompeo said during an interview with the Washington Times published Friday, when asked whether he thought climate change was man-made and how best to address it. He did not mention anything about man-made pollution in his remarks.

"Societies reorganize, we move to different places, we develop technology and innovation," he added. "I am convinced, I am convinced that we will do the things necessary as the climate changes."


Now I'm guessing that Mike isn't as stupid as he chooses to appear. He does, after all, work for Donald Trump who, when it comes to climate change, is a complete ass hat.

Yet Mike is sort of right when he says "we move to different places." Yes, indeed. Americans are retreating from rising seas. They're relocating to higher ground from our newly expanded flood plains. But they don't hold a candle to the wave of climate refugees desperate to escape the dystopia of Central America. Of course Mike doesn't want them to move. Oh well.
Posted by The Mound of Sound at 12:54 PM

There is no guarantee that knowledge will produce wisdom, Mound. Sometimes wisdom burns brightly among the uneducated.

Now in past times, a smart opposition would play the clip
"we move to different places."
split screen with the global migrants (incl. the Latinos coming north)

in past times there were more woke people to get it

It seems this man is educated beyond his intelligence. He does love the camera though. Anyong