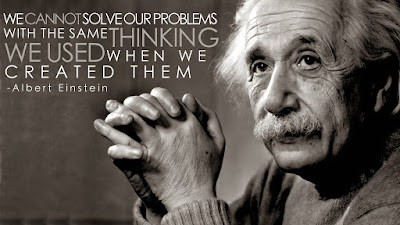 Albert Einstein said that we cannot solve a problem with the same thinking that created it. And yet we try, oh don't we try.

The problem in this case is the worst existential threat ever in the entire history of mankind - climate change. That's a matter of science, not politics. Politics played an integral role in creating the problem, especially during the neoliberal era implemented by Reagan, Thatcher and Mulroney, but that same thinking will offer no solutions to an existential problem very much of neoliberalism's own making.

The government of the day, now seeking our votes once again this October, is offering a political solution to climate change - a carbon tax. A carbon tax at such low rates that it will fail to produce any meaningful, effective answer to this mortal threat. A gestural response tailored to the perpetuation of the neoliberal order that has played such a role in creating this environmental nightmare. We're supposed to solve this massive problem with the same thinking that created it.

Trudeau hasn't even acknowledged the imperative of cutting greenhouse gas emissions by half by 2030. Why would he acknowledge what he has no intention of even attempting? Why acknowledge 50 by 2030 when, under his government, Canada is falling behind Harper's lacklustre target of 30 per cent by 2030?

Science is practically screaming for rapid and massive emissions cuts. Politics asks, "What about a carbon tax instead. Won't that do?"
Posted by The Mound of Sound at 10:09 AM

What you say is absolutely true, Mound, but let's not forget the other element that makes it easy for the politicians to get away with their nonsense: a majority of the electorate that wants to be whispered sweet nothings. It is a vicious, isn't it?

It doesn't need to be a majority that is whispered sweet nothings. Not in Canada. Just 3.5 in 10 need the whisperings.

It's that old Confuciun saying: 3 in 10 always agree.

Modern day politics (not necessarily politicians, mind you) has learned to game this insight. If three in ten always agree, then that's all a political party needs.

Just apply the narrow lessons Machiavelli offers in "The Prince" to this insight, and you have political power.

This can work both ways, however, but the groundwork for isn't there yet. Progressivism is still fairly disperate. A broad coalition can be built, and fairly quickly. Obama showed how. Bernie Sanders almost broke through the Democrat machine.

Here in Canada, the old parties are probably ready to be toppled. One surge, and they're toast.

Yeah, but we've had numerous chances to ditch FPTP all over Canada.
It's us, the somnolent 6.5 that keep handing them the keys.

Jr may pay for his betrayal on ER - with just enough lost votes to bequeath us to the CONs - and the beat goes on.