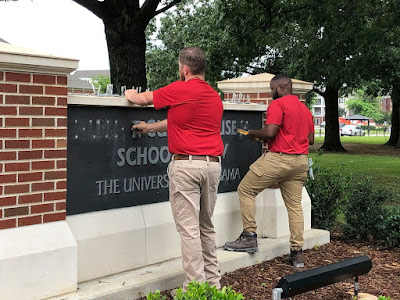 The Miami-based real estate investor has a soft spot for Alabama, the state where his family lived for generations, the place where he was born and raised.

My family’s roots run deep in the state and, for decades, we have been honored to celebrate that heritage by supporting the University of Alabama. It’s where my father learned to practice law, which gave him the tools to succeed in America along with a strong understanding of right and wrong. Over the past 30 years, we have chosen to repay that debt and make use of our good fortune by supporting the university financially. I’ve long believed that the school served the public good by training the next generation of leaders and, last year, I made the decision to donate $26.5 million so that those leaders could flourish just as my family has.

My love for Alabama is exactly why I was so horrified to watch its lawmakers trample over the Constitution last month. The ban on abortion they passed wasn’t just an attack against women, it was an affront to the rule of law itself. Part of being an American is engaging in public debate, and we can disagree over this issue. But the courts settled this matter a long time ago: Abortion is legal. So it was shocking to see legislators ignore this and pass a bill that turned women and health professionals into criminals, and it felt important to say so publicly.

I expected that speaking out would have consequences, but I never could have imagined the response from the University of Alabama, which on Friday said it would be returning my gift and removing my name from the law school. This decision will hurt future students. Less money will be available for scholarships, and there will be fewer resources for the school to use to educate young minds and help them grow.

It has been painful to witness administrators at the university choose zealotry over the well-being of its own students, but it’s another example of the damage this attack on abortion rights will do to Alabama. The bill will not survive a court challenge, and likely will cost the state a great deal in court fees and other expenses that could be used to help its citizens. But for those who support it, that collateral damage doesn’t even merit a passing thought. Total victory must be achieved, even if it means running roughshod over people’s rights and harming students.

This isn’t just about politics. I am an independent — not a Democrat or a Republican. But taking away a woman’s right to make decisions about her own body isn’t about politics, either; it’s an act of oppression. This is a moment for people of conscience to take a stand and be prepared to speak out against the actions of lawmakers in states such as Alabama who want to roll back the clock to an era when women needed to risk their lives to get an abortion. That’s why I have chosen to support the American Civil Liberties Union in its challenge of this unconscionable act. And I urge others to do so, too.

There is a Chinese parable about the grain of rice creating a mountain of rice.
Everyone agrees that 1, 10, even 1,000 grains are not enough, but at certain level, the addition of one grain will create a said mountain.
For me, an agnostic, the issue of foetal/human life is eerily similar. At some point in a pregnancy, foetus becomes a human capable of independent life outside a womb.
Therefore a woman’s rights to make ALL decisions about her own body, foetus included, are at that point no longer absolute.

And the west condemns Iran and others for religious fanaticism!!
Go figure.

"But the courts settled this matter a long time ago: Abortion is legal."

This guy is lower than a snake's belly in a wagon wheel rut. The courts settled it... How disingenuous. That's like me using "the courts settled that marijuana is illegal " argument 2 years ago and we can never argue or change the sanctity of that.

Good on the university for telling him to take his "gift" and shove it.

.. I reread the latest comment.. from 'anonymous' .. several times..j It left me very puzzled. I follow and have followed the various 'oddities' of 'centers of higher education' .. and could mention many examples of extreme failure. Abject failure.. total abandonment of coherent thinking. I also wonder at the opposite end of the spectrum.. exemplars who utilize or utilized the trust, opportunity, resources of such schools.. and served mankind.. and womankind.. who reached for the stars and over achieved

Thus, to think there are not frauds, losers, lamebrains or rascists entrenched at certain Universities is a laughable failure and presumption. At the same time there are wondrous champions.. but, uh.. 'Get stuffed' ? Will have to look deeper into that particular story.. it interests me.. No ! It envelops me.. drives me. Its a loose edge, a broken part of society.. To accept 'failure' of ethics or morality.. to 'tolerate' it.. at the highest administration of higher eduction in the land or world.. is akin to doing so at the highest level of 'public service' .. and its fatal.. its like allowing 'politics' to seed or dictate insolence, ignorance or partisanship within the highest level of 'justice' or reasoning within a society or culture.. In the animal world of nature it would be rabies rampant

Perhaps 'anonymous' can explain the 'rationale' or 'reasoning' .. or go read 'Under The Banner Of Heaven'.. perhaps she or he.. then can rationalize or defend.. abject failure .. ...


Sal, the world is full of curious creatures, some of them trolls.

The salamanders have spoken...

.. deary me.. a stunning rebuke... but hey, perhaps deserved..
Regardless, I will send this fine suggestion.. to Mound and his readership & commenters
and have a nice day, & a great week Anonymous .. no worries

" the world is full of curious creatures" That is good news.
Imagine a planet full of your own clones.
This reminds me about a joke:
Two clairvoyants meet.
One says to another, You know what?
The other nods, I know.