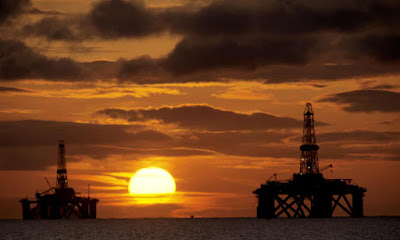 I always get the giggles when one sanctimonious Alberta premier after another berates other provinces for thwarting their insane designs to flood the world with high carbon, high cost, low value bitumen.  Like a drunken gambler, they're always just this close to the big score.

What makes it especially hilarious is the knowledge that, when they do get an energy boom, when they do make a little money, they blow it seemingly as fast as they can throw it away. Not for nothing do they keep a stock of those bumper stickers that read "Dear God, please give us just one more oil boom and, this time, we promise we won't piss it all away." That should be on their licence plates, the provincial motto. We won't piss it all away but just as sure as Lucy pulls the football when Charlie Brown is about to kick the field goal, piss it all away they do.

Which is why Alberta is constantly financially tits up. They can't handle money.

Which is also why they don't like to dwell on little Norway.  Norway is a little bigger, 5.2 million to Alberta's 4.3 million.  Like Alberta it also extracted a good bit of conventional oil, admittedly from the sea bed of the North Sea. Norway did not have billions of barrels of bitumen in addition to that conventional oil.

But Norway does have something that Alberta will never have. It has money. It listened to Peter Lougheed and today it holds the world's largest sovereign wealth fund.

The Norse have been pretty shrewd about handling their money, holding on to it, helping it grow. You could say they've done the opposite of what Alberta does.

Now Norway, seeing the writing on the wall, is moving to divest its fossil fuel holdings.


The world’s largest sovereign wealth fund, which manages $1tn (£786bn) of Norway’s assets, has been given the go ahead for the largest fossil fuel divestment to date by dropping more than $13bn of investments.

Norway’s parliament voted plans into law on Wednesday for the fund to dump investments in eight coal companies and an estimated 150 oil producers.

...It will, however, retain stakes in oil companies which are limiting their exposure to fossil fuels by investing in clean energy technologies. These include BP and Shell, but rule out London-listed North Sea companies including Premier Oil and Tullow Oil.

It will also step back from any company which generates more than 10GW of electricity from coal, or mines more 20m tonnes of thermal coal a year.

Alongside the breakthrough for fossil fuel divestment, the fund will for the first time have a legal mandate to invest directly in renewable energy projects rather than listed energy companies. The legislation empowers it to invest up to $20bn, beginning with wind and solar projects in developed markets.

...Norway’s oil fund has for years told the government that failure to sever ties with high-carbon companies could squander Norway’s state pension fund if they rapidly lose value in a lower-carbon world.

Lougheed knew what he had and he knew the downside of what he had, Mound. He knew a resource trap when he saw it. Those who followed him were simply not as bright as Lougheed.

The problem Lougheed had was the wrath of the oil companies and the support of the oil companies from most Albertans at the time. That is why he resigned. Albetans were and are so short sighted as to cut their noses off. Now they are in the mood to try and run the country from Edmonton. I have not seen such narcissism and down right arrogance as is prevalent as this time. I have felt that Trudeau has been looking for a way to engage the people of this Country to accept Climate Emergency. Bill C-69 is a piece of legislation designed to improve how the federal government assesses and approves major development projects such as pipelines and hydro dams, and restore public trust at the same time which has accepted the changes of the Senate. But that is not enough for Edmonton. Anyong

And what makes Kenney think that an investor sitting in London considering investment in Canada, isn't going to take heed of his racket. Anyong

As an Albertan; born in '48 in Edmonton, raised in Fort Saskatchewan and in Calgary and educated here in Calgary [and a few other places too] and I've been around a bit, a lot by some people's standards, I feel somewhat qualified to comment on this post.

There were sparks. But no fires. More or less.

Suppose that same sort of progressive thinking, on the left or right of the political spectrum, had produced successors worthy of the Lougheed-Trudeau struggles with political reality.

And yes, the fact Albertans are not mad as hell that the Heritage Trust Fund was, by and large, plundered amazes me no end. The Norway example is glaring by comparison.

I hope I am not, nor ever become a grumpy old man ... but if kids these days don't get off their ass and start kicking some ... I do not think it will end well for any of us.

I too have lived other places in this world. S. Korea taught me a lot about what Democracy actually is while working there. When S. Koreans don't like something their government does, they blasted well let them know it. They aren't like Canadians..."My father was a xxxxxx so I'm an XXXXX. Most S. Koreans are non-partisan. When they have what is considered to be a crocked politician in power, S. Koreans call politicians out, they are investigated and jailed or voted out. A S. Korean President has only one five year term and if they don't make it, well game over. It's the five year only period that does it. And I am not in agreement with you. If younger Canadians are not involved in what their government is doing, whose fault is that? And not all younger Canadians are lazy...not by a long shot. Anyong

My apologies Anyong. It was not my intent to imply that younger Canadians should 'not' be involved in the political process, rather the opposite. Additionally, I do not think they are lazy or wished to infer they are. It was rather I feel a sense of urgency that their voice needs to be heard. Right now. If they have to start yelling at me because I am a grumpy old man who is among the generation that may have set them adrift ... that is not necessarily a bad thing, in my view.