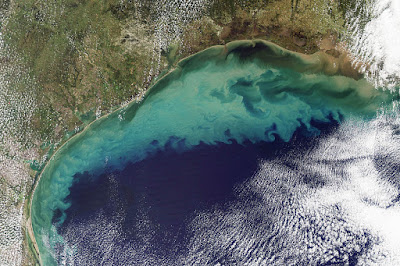 It's a matter of one thing that triggers another or a whole chain of things that cause other changes.


Experts blamed unusually high rainfall across the U.S. Midwest this Spring that washed farm fertilisers along streams and rivers through the Mississippi River Basin out into the Gulf.

The nutrients in the fertilizers feed algae that die, decompose and deplete the water of oxygen, the Louisiana scientists said.

“When the oxygen is below two parts per million, any shrimp, crabs, and fish that can swim away, will swim away,” Louisiana State University ocean ecologist Nancy Rabalais told the National Geographic magazine.

The problem might get even worse if any more significant tropical storms wash out more farm-fed nutrients, the scientists said.

Sewage run off, caused by the spring floods, also add to the problem, National Geographic reported.

This year's dead zone is predicted to blanket 8,700 square miles - barring additional storms in the weeks ahead. The record, 8,776 square miles, was set in 2017.  The zone, pictured above, stretches from the Mississippi River delta to Galveston.
Posted by The Mound of Sound at 9:50 AM