Are We Losing Pakistan to the Taliban? 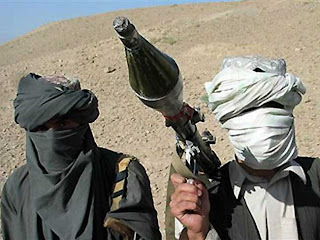 It's no secret that anti-Americanism is spreading fast through Pakistan. American air attacks and special forces raids intended to strike at al-Qaeda and Taliban leadership seem to be backfiring by renewing both sympathy and support for the insurgents.

Put simply, the Pakistani people are outraged at the idea of American military strikes against their homeland. American justifications don't seem to make any difference.

A suicide bomber yesterday blew up the Marriot Hotel in Islamabad, killing about forty people. That atrocity didn't generate much anger toward the attackers.

This is a hell of a rotten outcome to the campaign Washington began seven years ago. A guy who knows this troubled region about as well as anyone is The Independent's correspondent, Robert Fisk. Today he questions why the US thinks it can win in Afghanistan:

As the Algerian journalist Hocine Belaffoufi said with consummate wit the other day, "According to this political discourse ... the increase in attacks represents undeniable proof of the defeat of terrorism. The more terrorism collapsed, the more the attacks increased ... so the stronger (terrorism) becomes, the fewer attacks there will be."

We, of course, have been peddling this crackpot nonsense for years in south-west Asia. First of all, back in 2001, we won the war in Afghanistan by overthrowing the Taliban. Then we marched off to win the war in Iraq. Now – with at least one suicide bombing a day and the nation carved up into mutually antagonistic sectarian enclaves – we have won the war in Iraq and are heading back to re-win the war in Afghanistan where the Taliban, so thoroughly trounced by our chaps seven years ago, have proved their moral and political bankruptcy by recapturing half the country.

Oddly, back in the Eighties, I heard exactly the same from a Soviet general at the Bagram airbase in Afghanistan – yes, the very same Bagram airbase where the CIA lads tortured to death a few of the Afghans who escaped the earlier Russian massacres. Only "terrorist remnants" remained in the Afghan mountains, the jolly Russian general assured us. Afghan troops, along with the limited Soviet "intervention" forces, were restoring peace to democratic Afghanistan.

...And now? After the "unimaginable" progress in Iraq – I am quoting the fantasist who still occupies the White House – the Americans are going to hip-hop 8,000 soldiers out of Mesopotamia and dump another 4,700 into the hellfire of Afghanistan. Too few, too late, too slow, as one of my French colleagues commented acidly.

...The Soviet general at Bagram now has his amanuensis in General David McKiernan, the senior US officer in Afghanistan, who proudly announced last month that US forces had killed "between 30 and 35 Taliban" in a raid on Azizabad near Herat. "In the light of emerging evidence pertaining (sic) to civilian casualties in the ... counter-insurgency operation," the luckless general now says, he feels it "prudent" – another big sic here – to review his original investigation. The evidence "pertaining", of course, is that the Americans probably killed 90 people in Azizabad, most of them women and children. We – let us be frank and own up to our role in the hapless Nato alliance in Afghanistan – have now slaughtered more than 500 Afghan civilians this year alone. These include a Nato missile attack on a wedding party in July when we splattered 47 of the guests all over the village of Deh Bala.

Joseph Conrad, who understood the powerlessness of powerful nations, would surely have made something of this. Yes, we have lost after we won in Afghanistan and now we will lose as we try to win again. Stuff happens.
Posted by The Mound of Sound at 11:53 AM

Who is the "we" that is "losing" in Afghanistan? I don't include myself in this "we". Nor is Afghanistan "ours" to lose. It belongs to the Afghans and the Taliban or whatever are their problem to resolve not "ours". If "we" refers to Canada, well we should cease helping the Americans in this futile endeavor. Let the Evil Empire fight its own battles!

I have your point, Larry, but, unfortunately, "we" are part of the NATO/ISAF effort like it or not. You already know what I think of it.