The Ghost of Ronald Reagan 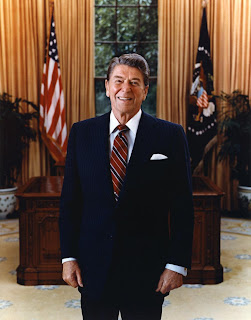 America's current fiscal meltdown lies squarely at the feet of a man most Americans revere, Ronald Reagan. It was Reagan along with his budget director David Stockman who spawned "supply side economics" and the "trickle-down theory" that were subsequently merged into "Reaganomics."

Ronald Reagan was as powerful a president as America has known since FDR. He was seen as a fiscal reformer. In reality, however, he saddled his nation with voodoo economics. In 198o, when Reagan came to power, the US was the world's largest creditor nation. In just a few years of Reaganomics, America became the world's largest debtor nation.

To help you understand how this rot set in nearly three decades ago, I've linked to two articles from the Atlantic Monthly. The first, entitled "The Education of David Stockman" was published in December, 1981.


The second, entitled "The Morning After," appeared in the October, 1987 edition of the magazine:

By the time The Morning After hit the news stands, the future undoing of America had already been mapped out. It's really quite astonishing stuff.

After leaving Reagan's White House, David Stockman retreated to his family's dairy farm in Michigan. He subsequently entered the business world. As Wikipedia notes, the past few years haven't been pleasant for David Stockman and the next 30-years look even worse:

On March 26, 2007, federal prosecutors in Manhattan indicted Stockman in "a scheme ... to defraud [Collins & Aikman]'s investors, banks and creditors by manipulating C&A's reported revenues and earnings." At the same time, the Securities and Exchange Commission brought civil charges against Stockman related to actions he took while CEO of Collins & Aikman.[3] Stockman faces up to 30 years in prison.
Posted by The Mound of Sound at 10:39 AM

Email ThisBlogThis!Share to TwitterShare to FacebookShare to Pinterest
Labels: Reaganomics

PreSchool, your cut'n paste, Fox News agit prop is tedious. We all know that the subprime mortgage fiasco occured, not under Clinton, but under Bush and his deregulated Treasury. Fox News is a propaganda service, you dolt. Besides, neither Clinton nor Bush caused anyone to lend to anyone as this fantasy of yours suggests. The Repugs write this nonsense and you start gulping. Sad, really.

Just one more point, chum. It was Reagan who Cheney held up as having shown Republicans that deficits don't matter. Those were Cheney's words. God you're thick!