McCain - Goofier By The Day 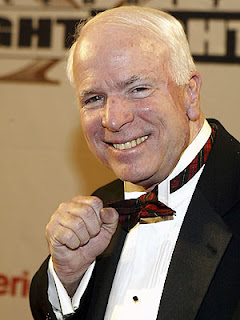 John McCain has turned into the guy who fell out of the Stupid Tree and hit every branch on the way down.


For weeks and weeks McCain has insisted that the fundamentals of the American economy are strong, strong enough in fact to make permanent the Bush tax cuts for the rich despite the government's debt crisis.


Now that Fannie and Freddy have been nationalized, Merril Lynch snapped up and Lehman Brothers tossed into the latrine the Old Fool is dancing around trying to squirm out of it. From Salon.com:


On NBC's "Today" show, Matt Lauer, from the floor of the New "bloodbath" and asked Mr. McCain how he could say that "the fundamentals of our economy are strong" while his campaign released an ad saying that the economy is in crisis. "Clarify this for me," Mr. Lauer said. "It doesn't seem as if both things can be true."

Mr. McCain replied by saying that when he spoke about the fundamentals of the economy, he was referring to the workers -- which is different from how he has described the term before.

"Well it's obviously true that the workers of America are the fundamentals of our economy, and our strength and our future," he said. "And I believe in the American worker, and someone who disagrees with that -- it's fine. We are in crisis. We all know that. The excess, the greed and the corruption of Wall Street have caused us to have a situation which is going to affect every American. We are in a total crisis."

It's hilarious to see McCain rise up against the greed and corruption of Wall Street given that the late, great Merrill Lynch has been his Numero Uno campaign contributor. McCain is up to his Jockey shorts in Wall Street.

And just what has the crusty old bugger been smoking to make him believe that the workers of America are doing all that well? Their government has every American household in hock to the tune of $440,000 (read my earlier post "Right Wing Meltdown"). Savings are at all time lows, debt at all time highs, folks are losing their homes in foreclosures and their jobs to outsourcing.


John McCain is saying whatever comes out of his backside without even trying to reconcile the persistent contradictions. Jeebus, I sure hope the American people aren't dumb enough to put their country's future in the hands of this guy. He's like Dan Quayle minus the intellect.
Posted by The Mound of Sound at 12:54 PM

But he was a POW.

Makes you wonder just how far he would have gotten if he hadn't been.

I'm sorry because that comes off pettier than I really mean. But it is the first thought that crosses my mind anymore when he just spews garbage and lies just prior to putting on his "I am noble" act.

Hey, it's worked for him this long. I don't expect it to change.

The funny thing to me in this is I always liked John McCain. When I lived in DC, I had a neighbor who is a Republican, and somewhat connected in the party - a great deal actually but I'm not going to say anymore about it. And they made it very clear to me that they despised John McCain because they didn't feel he stood for anything except himself.

And I defended him because I knew other people who had worked in his office, and they worshiped him.

So now I'm seeing the "full" John McCain and realizes there is a lot to be said for my neighbor's very negative impression, but also an understanding at why others still feel differently.

A psychologists could - and probably will - have a field day with this one, regardless of how the election plays out.

I completely understand Joseph. I really admired the McCain who ran in 2000 which only magnified my dismay at the McCain of 2008. Even some of McCain's relatives have had enough of the guy:

Thanks for the link. Wow.

I guess that is quite a testament, huh?

Have a good one.