At Least It Won't Kill the Fish 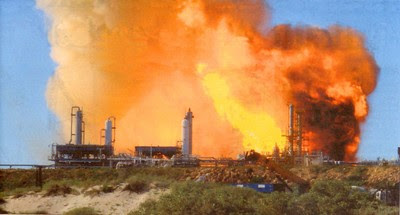 In British Columbia, our provincial government has its own fondness for fossil fuel windfalls.   The big difference is that it's not heavy bitumen but natural gas.  Premier Cristy Clark is hellbent on flogging the province's gas resources to Asia just as fast as possible.   Not surprisingly that means tankers running out of Kitimat, the same high-risk route being pursued by Enbridge and its concealed partners for bitumen trafficking.

The idea is for a pipeline carrying LNG, liquified natural gas, from the gas fields in northeastern B.C. to Kitimat and then onward to Asia.   Why Asia?   Because there's a glut of the stuff now in America due to fracking which means the Asian price is three times the domestic price.

LNG.   As a substitute for coal or heavy oil it makes terrific sense.   It is, by comparison, a low-carbon fossil fuel.   And, in terms of transportation it's also better - provided you're nowhere in the vicinity if something goes wrong.

Liquified natural gas is incredibly explosive.   I used to watch LNG barges being towed through Vancouver's Coal Harbour from my office window knowing, if it should explode, it would cause an overpressure that would shatter the thousands of windows overlooking the harbour, sending shards of splintered glass to shred the occupants.

In terms of the north coast, a LNG tanker catastrophe would probably be preferable to a bitumen tanker disaster.    It would possibly annihilate the crew but the only thing sinking to the bottom would be the shattered hull.

In discussing her enthusiastic support for natural gas sales to Asia, our premier said we have to act fast before the opportunity evaporates.   It's hard to make sense of her remark.   Does she believe that fossil fuel energy prices are going to plummet soon?  Maybe she realizes what others are coming to recognize, that we're in a fossil  fuel bubble that may well collapse in the near future.

Maybe she just wants to secure her favors before she is ousted next year?

I found the ad, http://www.youtube.com/watch?v=UVm5KDAt2XU

1 trillion dollars... They will tell us anything to try and get re-elected won't they. Why don't they just tell us it can generate a bazillion dollars for bc* (over the course of 1000 years)

I hate their bullshit propaganda machine.