Enbridge Public Hearings Coming to Victoria. Public Told to Bugger Off Down the Road. 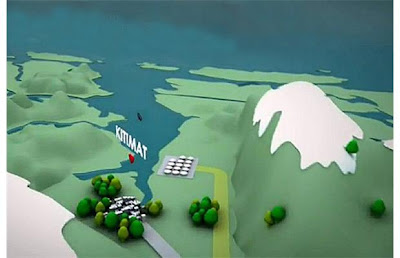 There won't be any public at the Enbridge public hearings when they reach Victoria in January.   The hearings will be closed to the public.   The hearing room will admit only registered speakers, one guest per, the media and the apparently terrified Joint Review Panel members.

Spectators will not be allowed to attend Victoria hearings into the Enbridge Northern Gateway project in January, to avoid the risk of demonstrations.

Instead, people interested in watching the proceedings will be sent about three kilometres away to the Ramada Hotel on Gorge Road, where they can watch a live video feed. The hearings are being held at the Delta Ocean Pointe.

Victoria is obviously a hotbed of radical dissent and murderous anarchy in the fevered minds of the Joint Review Panel.
Posted by The Mound of Sound at 9:49 AM

I'm not sure why the hearings are even taking place. We know the Harper cabinet will approve the pipeline project regardless of the board's ruling - they gave themselves that power in an omnibus bill.

Canadian citizens should be outraged by this anti-democratic behaviour. But will we act?

It's nothing but sickning that is the short of it. Freedom for the public to express their opinion infront of those Endrige people has been denined....what they are saying is we want to control the kind of questions to be asked. We don't care what you the general population thinks...just go to sleep.

Yes it is a sickening farce. Fortunately almost everyone in B.C. realizes that which will strip the predisposed panel hearings of all legitimacy. If the public takes the environmental assessment as rigged we could see civil disobedience on a massive scale. In a corrupt regime like ours that's the only valid form of dissent.

Harper's only recourse may be to resort to violent repression in which event the entire province may turn on him and every government, province and corporation behind the Northern Gateway.

The Liberals overplayed their hand in Alberta almost four decades ago and have never been forgiven for it. The Tories risk the same backlash from British Columbia.