The Next Time Someone Rails On About Sharia Law, Remember This 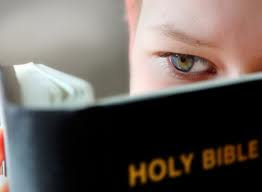 From the December issue of Harper's, an item captioned Grounded for Life.

From "God's Law: The Only Political Solution," by Charles R. Fuqua, an e-book published in April and aiming to show how the Bible can be applied to U.S. law.   Fuqua, a former state legislator in Arkansas, was, as of press time, again seeking election.

"The maintenance of civil order in society rests on the foundation of family discipline.  Therefore, a child who disrepsects his parents must be permanently removed from society in a way that gives an example to all other children of the importance of respect for parents.  The death penalty for rebellious children is not something to be taken lightly.  The guidelines for administering the death penalty to rebellious children are given in Deuteronomy 21:21 'Then all the men of his city shall stone him to death with stones' so you shall put away the evil among you, and all Israel shall hear and fear.'

"This passage does not give parents blanket authority to kill their children.  They must follow the proper procedure.  Parents were required to take their children to a court of law and lay out their case before the proper judicial authority.  I know of many cases of rebellious children; however, I cannot think of one where a parent had given up on a child to the point of taking that child to court and asking that the child be put to death.   Even though this procedure would rarely be used, if it were the law of the land, it would be a tremendous incentive for children to give proper respect to their parents."

Thus endeth the very Judeo-Christian sermon for today.
Posted by The Mound of Sound at 1:07 PM

It seems deeply at odds with their "you can't kill a foetus evah" philosophy because "life begins at conception and is precious."
This is where believing in bollocks inevitably leads.

Yes, sigh. It is the trans-denominational scourge of fundamentalism.

"Only in America can you be pro-death penalty, pro-war, pro-unmanned drone bombs, pro-nuclear weapons,﻿ pro-guns, pro-torture, pro-land mines, and still call yourself ‘pro-life.’"

They have to get you out and breathing before they can put you to death. Sheesh.