Australia Roasts and It's Lights Out 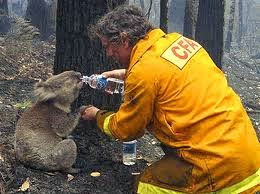 Australia is reeling from the worst heatwave to hit the country since - oh, I see, the worst since 2013.

For city dwellers, heatwaves tend to be particularly severe - crowding, congestion, traffic, lack of air circulation and so on.   But it's even worse, a lot worse, when the power goes out and, right now, Australians are enduring blackouts.  The Guardian's Alex White is feelin' the thunda' down unda'.

While the sunburned country is used to hot weather, our infrastructure was not built to cope with several days of above 40°C temperatures. Now Victoria has now seen 4 consecutive days above 41°C, breaking records that have existed since 1855.

In 2009, the heatwave preceded Black Saturday, one of the most devastating bush fires in recent times. The human cost of the 2009 heatwave was more than 374 deaths, in addition to the 173 people who died in the fires.

While there were heatwaves across most of Australia for the past fortnight, the heatwave this week finally hit the south-eastern seaboard, and Melbourne where I live.

In nearby South Australia, the state capital Adelaide became the hottest city on earth, with temperatures in Roseworthy exceeding 46°C. (That's over 114.8°F if you don't follow Celsius.)

Under these conditions, we saw train and tram tracks buckle. Melbourne ground to a halt, when the public transport providers, Metro and Yarra Trams advised commuters to leave work early to avoid massive delays and service cancellations.

It became so hot that the Australian Open tennis competition had play stopped after players collapsed and hallucinated cartoon characters.

And nothing goes better with a record heatwave than government cutting off your electricity.

On Wednesday, the Victorian premier Denis Napthine, who has introduced an effective ban on the construction of wind turbines, talked about the need to "reduce the supply to some households".

He's talking about cutting the electricity to homes, during the hottest part of the day.

"The Government is insisting that priority is given to electricity supplies for hospitals, nursing homes emergency services, public transport and major infrastructure," he said in a radio interview, and he also noted that essential services "will be exempt" from power cuts.

Fortunately Australians recently elected a new prime minister, Tony Abbott, who knows that global warming is a hoax.   One of the first things Abbott did on taking office was scrap Australia's carbon pricing scheme and shut down the country's climate change institutions for which he was warmly congratulated by - you guessed it - the Harper government.
Posted by The Mound of Sound at 7:59 AM

*sigh* It's all downhill from here :/

I think you could be right, Richard. I just posted an item that you should find interesting.

Could Australians be even dumber than we are?

I think there's some kind of mental illness virus that only politicians are susceptible to and it's become a pandemic.

Well, PLG, it's like Mother Nature is giving the Aussies a sharp kick in the cojones, isn't it?

You could be right, Joe. There does seem to be a disassociative element to modern political leadership that in some ways does seem to resemble a collective psychosis.