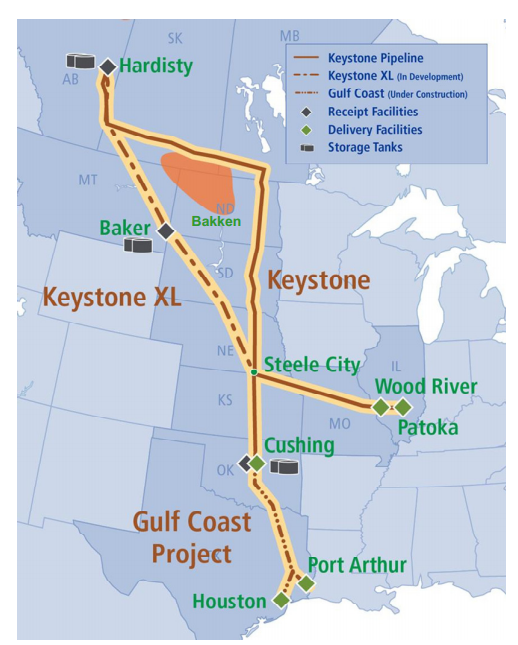 52% of Canadians still register support for the Keystone XL pipeline but that's down 16-points from the 68% approval we gave it in April.  Opposition to the pipeline during that interval shot up 40%.

Nik Nanos, president of Nanos Research and Global Fellow at the Woodrow Wilson International Center for Scholars, told Bloomberg he thinks the poll’s results could make the Canadian government concerned for the future of the project.

“This has implications for the anti-Keystone movement in both countries,” he said.

The new poll brings the Canadian support level on par with the most recent U.S. polls on Keystone XL. A December Bloomberg National Poll found 56 percent of American respondents supported the project, but that 58 percent also supported requirements that Canada reduced carbon dioxide emissions of the project.
Posted by The Mound of Sound at 10:13 AM

Mound, I doubt this will change Harper's resolve on this pipeline. His mantra will be that majority of Canadians support the Keystone XL Pipeline. I am hoping that Obama administration will say no to it but fossil lobby is quite influential in U.S. as well.

It won't change Harper's resolve. But what it proves -- again -- is that Conservative values are not Canadian values.

The same Nanos poll found that 58% in B.C. opposed it. Doubt it will make any difference to Harper.

Well if support is eroding at the average rate of 2% per month, a majority of canadians will oppose it sometime in Feb.

by which I mean... a majority of canadians will not support it.

outright opposition will take a while longer

Presently visiting in Texas. People met here know all about the proposed pipe line from Fort McMurray, Canada and they don't want it. They call it dirty oil from the Tar Sands not Oil Sands even though they are not sure where it is in Alberta but know it is from Alberta. Also there was held an "Expo" on water shortages in Texas, January 25, 2014. There is much concern and people are vocal about Climate Change which was a surprise to me. Anyong.

We're caught between the "rock" of train derailments and the "hard place" of pipeline ruptures while the lesser of the two evils, renewable energy, is being pushed to the sidelines. Whoever controls the conversation controls the people.