The Tyee Asks: Are the RCMP Ready for the Battle of The Northern Gateway? 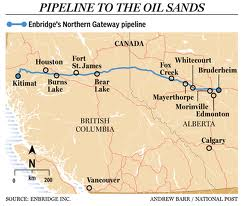 It's looking increasingly unlikely that Harper will ever get bitumen into supertankers at Kitimat wihout one hell of a battle against First Nations, environmentalists and just ordinary citizens of British Columbia willing to stand against the Northern Gateway pipeline.  The Tyee questions whether the RCMP is really up to the job.

The RCMP clearly can manage a demonstration or two.  They can bring in buses and haul away the passive resisters, again and again and again.  That, however, is a far cry from having to defend that pipeline from the Alberta border to Kitimat.   The pipeline will be crossing through hundreds upon hundreds of miles of wilderness where it's vulnerable and almost impossible to defend against people who know how to move through that wilderness by cops who haven't a clue.

At least in Iraq the pipelines were open with vast desert sightlines.  The Northern Gateway would be run across mountains and through forests.  Those willing to use force against the pipeline have the initiative.  They get to decide what to attack, where, when and how.   The defenders have to be everywhere, all the time.  It's a lot easier to defend against insurgents in a desert than in a jungle - or wilderness forest.

Who knows, maybe Harper will declare the pipeline route a free fire zone and patrol it with drones armed with Hellfire missiles.  Who knows?
Posted by The Mound of Sound at 12:36 PM

I've said before that he'll have no qualms about putting the army and reserves into play.

There will be blood.

I'm not sure how well the army could do with this scenario. In Afghanistan they had everything from close air support to attack helos, armour and artillery not to mention numerical superiority and they couldn't take down a gaggle of Afghan farmboys armed with Korean-war vintage weapons.

I'm not sure how well they could do either but how well they might do was a mere fantasy to our esteemed leaderidiocy when they sent them to Afghanistan so I doubt it will any different this time.

.. the question really is..

What does Stephen Harper think he can get away with?
Because that's exactly what he'll go for ..

like some sort of deeply disturbed Oil Hunger Games For China

What will likely happen.. is the First Nations will continue to filter into the Last Redoubt.. the Canadian Wilderness.. Lawyers @ 900.00 per hour will maneuver manfully in the various and sundry courts of law, golf together and do lunch.. probably with lobbyists and political animals

More concerned and stoney eyed Canadians will drift quietly into the forests.. ominously.. and back channel discussion, invitation and negotiation under First Nation Law will be extended to befuddled and uncertain Canadian Forces and RCMP ordered into those same forests by gasbags like Harper, Clark and Redford..

Those F-35's will come in real handy.. for Stephen Harper's wet dream of a Good Old Fashioned Ethical Civil Oil War .. Where they might land or refuel is another question.. fracking sites? Or refitted for amphibious landings on tailing ponds or salmon rivers??

All this for one complete sociopath asshat.. that says he wrote a hockey book, loves cats and pandas, but Israel even more.. and his idiot horde of complete go along n git along sellout cowardly dicks that think they can snow Canadians.. or piss on our legs and tell us its raining

Come to the forests and mountains Stevie.. find your Waterloo..
see your pale, sickening wankish legacy trashed, bashed.. blown out

If you want to visit some disturbed Toronto-Leaside, Calgary, Ottawa version of Wounded Knee..
or hold class like some split tongue, smallpox blanket seller.. ??
Why just get er on .. loserville cheatin twit !!
Do some more of your legislation.. you ignorant prick ..
See who lines up behind you.. and your Rapture Bad Dream Never Glowed Deadheart fan club

Far from being any sort of golden haired warrior like General George Custer ..
You're just a toxic snake oil wannabe.. with bad hair .. seeking his Little Bighorn

I genuinely hope the revolt begins here, Sal, when a lot of ordinary people finally say "enough" and stand up to obstruct the trafficking in the filthiest petroleum on the planet.

For most of us it will be civil disobedience but that will not be enough for others who may have our sympathy even if not our direct support. That reservation could change quickly enough if the government turns brutal.

For the time I spent up in the Peace River district I know that the Oil Patch still holds tremendous sway. Nut by the same token, I know from even my time there in the mid-90's that there is a growing tide of people who are fed up with tainted wells, bad air, and with Suits & Pols who dismiss any and all objections that stand between then and their bonuses. Wiebo Ludwig, whom I met more than once, may have been the voice of a hirsute prophet crying in the northwest Alberta wilderness, but his words and warnings have not been forgotten...

Stephen Harper has no track record of doing much of anything, either from before he became a politician, or since becoming PM. All he's notably done in office is flush a few useful government programs down the sewer.

He might want a Northern Gateway. He has no clue at all how to get it built. We're all watching him fail right now. It's surely less likely to proceed thanks to his time in office.

I've said it before, but Canadian oil sands companies could hardly have had a worse friend than Steve Harper.

Neil, Chris - I so hope you're both right. Still and all, I fear we will wind up with a fight on our hands.