Say It Ain't So, Joe. Canada's Ghost Ship and a Tale of Cannibal Rats. 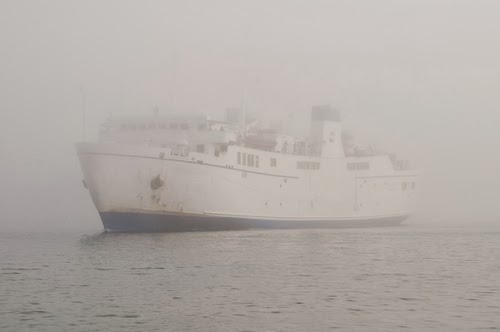 Somewhere out on the briny deep the abandoned cruise ship, Lyubov Orlova, may be drifting toward somebody's coast.   And she might be full of cannibal rats.   Who left the Lyubov Orlova adrift?  The Harper government, that's who.

It’s possible that this specific ghost ship, the Lyubov Orlova, sank — which would pose environmental problems of its own. But its lifeboats are designed to send off signals when they make contact with the water. Only two such signals have been received, presumably from lifeboats that fell off the ship’s side. The rest haven’t been heard from; ergo, the ship may very well still be out there.
Also not made-up: Canada did it. The Lyubov Orlova was seized by Canadian authorities after its owners racked up $250,000 in unpaid debts. En route to being sold for scrap in the Dominican Republic in January 2013, a storm snapped her towline. Transport Canada decided not to pursue the ship, declaring
Also not made-up, probably: Cannibal rats. “Experts” believe the ship could still contain hundreds of rats, which naturally would only have been able to survive this long by feeding off one another. “There will be a lot of rats and they eat each other,” Belgian salvage hunter Pim de Rhoodes explained. “If I get aboard I’ll have to lace everywhere with poison.”

The saga of Canada's ghost ship doesn't sit well with the British newspaper The Independent which has speculated (rashly) about the Orlova wrecking on some British shore and releasing its cargo of diseased, killer rats into the countryside.

The authorities in Newfoundland tried to sell the hull for scrap – valued at £600,000 – to the Dominican Republic, but cut their losses when it came loose in a storm on the way.

Sending the ship off into international waters, Transport Canada said it was satisfied the Lyubov Orlova “no longer poses a threat to the safety of [Canadian] offshore oil installations, their personnel or the marine environment”.

Experts say the ship, which is likely to still contain hundreds of rats that have been eating each other to survive, must still be out there somewhere because not all of its lifeboat emergency beacons have been set off.

The head of the Irish coastguard, Chris Reynolds, said the ship was more likely than not to still pose a threat.

“There have been huge storms in recent months but it takes a lot to sink a vessel as big as that,” he said. “We must stay vigilant.”