Making Sense of What's Going on in California


These two satellite photographs from the National Oceanic and Atmospheric Administration present the problem very clearly. 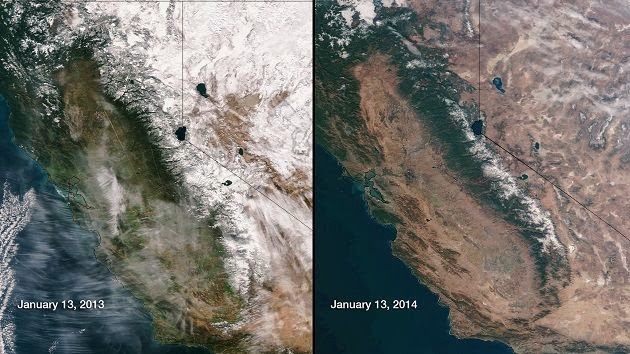 Here's what you need to remember.  Last winter's snowpack in the Sierra Nevadas, shown on the left, was lousy.  It was a bad year that contributed to last year's California drought.  So, if the left image is bad, you can draw your own conclusions about the photograph on the right.

The lack of snowpack means severe cutbacks in hydroelectricity.  That means California will have to fall back on fossil fuels, increasing both costs and emissions.

We're looking at sustained drought along the U.S./Canadian west coast through into at least April. 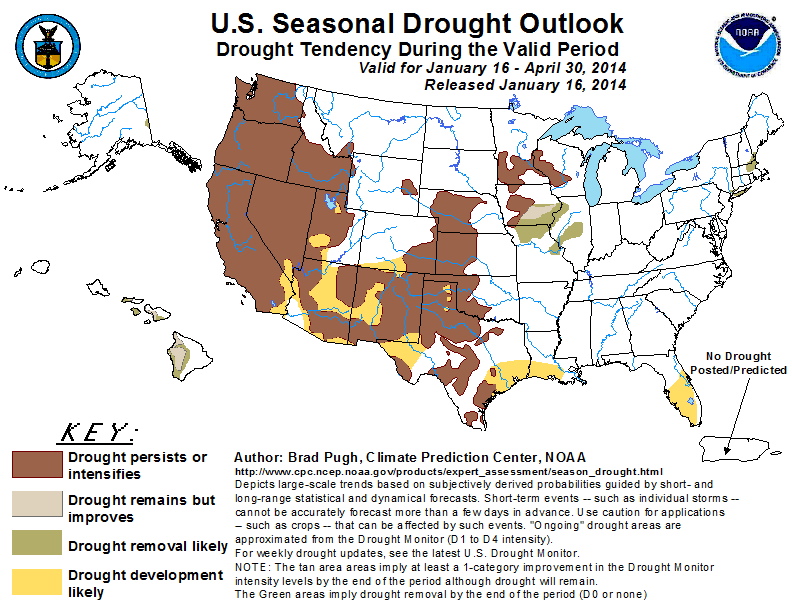 Powerful pictures, Mound, that are worth several thousand words.

You don't even have to go to California. The snow pack in the lower Fraser basin of B.C. is currently at 7% of normal and the last 3 months of 2013 on Vancouver Island were the driest on record.

Dave, I live two hours north of Victoria. I'm keenly aware of how dry it is on the island.

I wonder what effect this will have on the fire risk to our pine beetle ravaged forests in the interior?

I expect the southern interior will be set to explode. The northern interior may be alright. Vancouver Island will also have a problem.

Do you think there is any chance of doing something to curb global warming?

We are moving deeper and deeper into it.

Do you see any sign of any country, perhaps excepting Germany, planning to decarbonize its economy and shift to non-fossil energy?

Ottawa says we're cutting emissions but the Harper government's mandatory report to the UN admits Canada's emissions will soar by 38% by 2030 and, even then, the UN thinks Harper has cooked the books.

How would we begin to curb global warming? It's telling that we have set a target of 2C by 2100. Yet the same carbonized atmosphere that would heat the world by 2C by 2100 would continue to heat the world thereafter because the main greenhouse gas from fossil fuels, CO2 is so persistent.

Our governments are quietly resisting a transition out of fossil fuels because they're dependent on royalties which they won't receive from clean energy alternatives. Coal, oil or natural gas - it doesn't matter - produces royalties that can be used to fund tax cuts for top income brackets and cover government spending.

That pair of pictures was definitely a "holy $#%!" moment.
Those there Californians need a ton o' solar, right now. At least they have the sun for it.
Here in BC I'd figure we need a stack of wind. If things keep getting drier I wonder if we'll have problems with maintaining the hydroelectricity supply . . .

Gwennedd says: Coastal BC might be better off using tidal. I've noticed a lack of wind as well as rain in the central Island.

The province supposedly has an agency that's pursuing tidal, wind, solar, run of river, biomass and geothermal projects but I get the impression it's nearly dormant or perhaps just window dressing. The current that flows through the narrows of the inland passage that constitutes the northern half of east Vancouver Island would seem to offer a vast amount of free energy. Why it's not been tapped is beyond me.