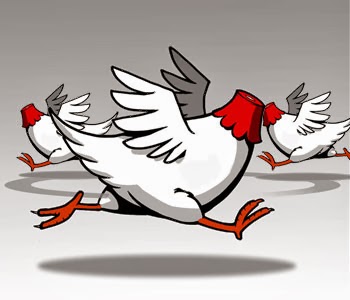 Every voice helps.  The man who may yet be King has dismissed climate change denialists as a bunch of  'headless chickens."

The Prince of Wales has launched an attack on climate change sceptics, describing them as the "headless chicken brigade" and accusing "powerful groups of deniers" of engaging in intimidation.

"It is baffling, I must say, that in our modern world we have such blind trust in science and technology that we all accept what science tells us about everything - until, that is, it comes to climate science," the prince said in a speech on Thursday evening.

"All of a sudden, and with a barrage of sheer intimidation, we are told by powerful groups of deniers that the scientists are wrong and we must abandon all our faith in so much overwhelming scientific evidence.

The prince told the audience of sustainability experts, entrepreneurs, business leaders, and policymakers: "As you may possibly have noticed from time to time, I have tended to make a habit of sticking my head above the parapet and generally getting it shot off for pointing out what has always been blindingly obvious to me.

"Perhaps it has been too uncomfortable for those with vested interests to acknowledge, but we have spent the best part of the past century enthusiastically testing the world to utter destruction; not looking closely enough at the long-term impact our actions will have."

I wonder if the prince has ever had an opportunity to meet Joe Oliver.

I've always liked Prince Chuck. Sure, he's rich. And he's inheriting an anachronistic position. But that stuff isn't his fault; given that handicap he's a surprisingly good guy and his ideas about sustainability and agriculture have long been pretty damned sound.

When he dis-inherits the throne and drops into the muck with everyone, then I might believe him.

We don't routinely bash anyone else who refuses to hand over all the money they inherited. Why should a royal be the only people we hate just for operating in the system we're in?

I cannot wait for Joe Oliver,(the resource weasel)'s response. I bet he talks about inbreeding in royalty and how undereducated they are, lol.
Good for Prince Charles for speaking sense.

lol, you are right Double Nickel. I stand corrected.

Plg....Good on 'em, totally in agreement. Joe Oliver meeting Prince Charles, what a wonderful thought. Not very bloody likely. On the other hand, people in Canada who are big in the Roman Catholic Church would oppose Charles regardless. Many RC's still believe the crap put out so many years ago about how Canadians send have their tax dollars to help support the Royal Family in Britain. That still exists big time.

Prince Charles entertains far too many nutty ideas (for example, he likes homeopathy) to want him as an ally in a fight against unreason. And he's also going to the head of a church in the near future. That's going to be pretty big conflict of interest ;-) .

Meh, it's just Anglicans. They barely count. Reminds me of this description of a small town English guy: "The church he stolidly avoided going to was bedrock solid C of E, and he wouldn't have dreamed of stolidly avoiding going to any other."
Mind you, some of the African ones I won't say; the African branch of the Anglicans are pretty scary. But still if anything less scary than the African branches of some other Christian groups, like the Catholics.