The attack involved airborne troops dropped onto the airport from An-2 biplanes like this one. 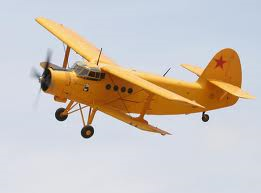 With a cruise speed of 120 mph. and a really loud, radial engine, the venerable An-2 (NATO designation "Composter") can drop a squad of 10-paratroopers, eventually, somewhere.  The idea that 15-of them would be able to get into South Korea undetected is, however, a bit of a stretch.
Posted by The Mound of Sound at 4:07 PM

If they are AN-2 models built with wooden frames and propellers, covered in canvas, then they would have a certain amount of stealth characteristics. But don't tell Lockheed. It's all hush-hush.

Why nit just have a parade with a 200-piece marching bamd? Be about as subtle.

I remember reading some years back of a demo pf its famed "parachute manuver" that an AN-2 gave at Oshkosh one summer. In a moderate headwind with leading edge slats deployed and full flaps it descended from 200 - 300 feet nearly vertically a very gentle rte and settled with barely a bounce. She may be old, cranky, and clanky, but she can still fly...

But to deliver a strike force of 150 would require 15 aircraft travelling for at least 90-minutes undetected. I really wouldn't want to be along for the ride.

TMN, it sounds like that would have been something to see.