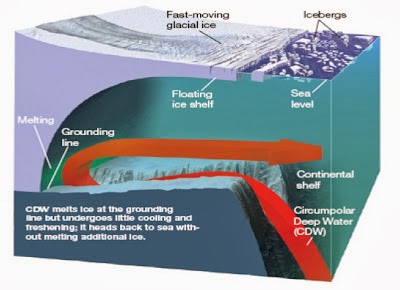 This actually came out yesterday but I had maxed out my quota for this stuff so I put it off to today.

From Deutsche Welle news service comes news of a tipping point passed in the Antarctic where the continent's glaciers have entered a state of retreat that's no unstoppable and will be triggering significant sea level rise now and in the years to come.  Did I mention it's 'unstoppable'?

Pine Island glacier ... is responsible for some 20 percent of the total ice loss from the region. Gael Durand of the French University of Grenoble is one of a team of scientists who have just published a new study using three different models: "We show that the Pine Island Glacier will continue to retreat and that this retreat is self-sustaining. That means it is no longer dictated by changes in the ocean or the atmosphere, but is an internal, dynamic process", Durand told DW.

This will mean an increasing discharge of ice and a greater contribution to global sea level rise. "It was estimated at around 20 gigatons per year during the last decade, and that will probably increase by a factor of three or five in the coming decade. That means this glacier alone should contribute to the sea level by 3.5 to 10 millimetres a year, accumulating to up to one centimetre sea rise over the next 20 years. For one glacier, that is colossal", the scientist said.

Durand's new study shows that the glacier is now flowing at a rate that makes the process irreversible. This particular glacier is being markedly affected by melting because it is close to a current of warmer water, which melts the ice shelf from below and makes its way into cavities below the ice in places. This reduces its ability to act as a butress to the rest of the glacier, so that more and more ice flows towards the ocean.

Even if the air and ocean temperatures cooled off to what they were a hundred years ago, Durand is convinced the glacier would not recover. And there is no sign of any trend in that direction anyway, he stresses. Humbert is more cautious, saying irreversibility is hard to prove conclusively. But it is hard to imagine any factor which could reverse the trend, she admits.

So, what does that mean?  Pine Island glacier is beginning to recede at a speed that will translate into an overall, 1-cm. annual sea level rise.  Put another way, that's over 7-inches of sea level rise per decade from this one glacier.

Durand says the study should arouse concern because of its significance with regard to the global climate. "These glaciers have already passed the tipping point, and that is irreversible. That means because of our behaviour, our climate is changing and will continue to change a lot. I think it is one of the first times we are passing these tipping points."

The scientist compares the situation to that of a cyclist coming down from the top of a mountain and unable to brake: "We have to fear that the retreat will continue, that other glaciers in the region will start to do the same, and that we will have a collapse of this part of the ice shelf. That would take centuries, but it would mean a rise of several metres in sea level."

The last report by the Intergovernmental Panel on climate Change (IPCC) warned of the implications if the glaciers of West Antarctica were to become unstable. "Here," says Durand, "we have proof that that is already happening with this one."

Some relatively unscientific anecdotes: we have a small golf links here in the central Salish Sea. This time of year the ground should be "squishy", but it's not.

Thing everybody's talking about: did you ever see a November without precipitation? I haven't met anyone who has, even among the old timers, but that's what has happened--- and what we're looking at for next summer; snowpack is way down, too---mind, that's something most people can remember happening from time to time. But no rain in November?---that's very unusual.

I know. It feels kind of grim. There's not much encouragement from the top of Mt. Arrowsmith.

The weather outlook I checked isn't calling for much rain, if any, for the next 10-days.

The U.S. drought advisory isn't very encouraging for our region through the end of April.