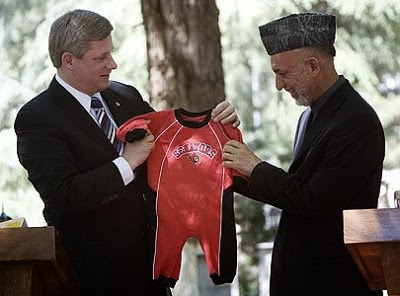 Outgoing (this year) Afghan president Hamid Karzai says the U.S. needs to start peace talks with the Taliban or they might as well just pack up and leave.

Given that the United States invaded Afghanistan in the first place with the intention of crushing al Qaeda and driving out their supposed Taliban sponsors, it's sort of like Karzai telling the Americans they can stay but only if they essentially admit defeat.

Just how does the United States negotiate with the Talibs?  Negotiations are a give and take process.  And just what exactly is "the Taliban" any more?  Today there's a Pakistani Taliban and an Afghan Taliban and then there's a gaggle of other groups more or less associated with the insurgency/rebellion.  When you consider the history of shifting loyalties and alliances, figuring out who you're actually dealing with from one year to the next is really an exercise in herding cats.

And how do you deal on behalf of a surrogate government that is, itself, a criminal enterprise and about to undergo a rigged electoral equivalent of regime change?  Hamid is going to gather up his foreign bank books and di di mau the hell and gone from Kabul this year.

Karzai's defiant tone struck a chord with those in the west who have already decided that further discussion with the Afghan president may be pointless and waiting for his successor to be elected is the best option.
"The more people speak about it being signed after the election, the more irrelevant he becomes," said one diplomat. "Sad as it is, we might have to bank on the next guy."

Roll the dice and "bank on the next guy"?  Seriously, that's the game plan?  See, I told you.  The inmates are indeed still running the asylum.  What if the "next guy" is this guy? 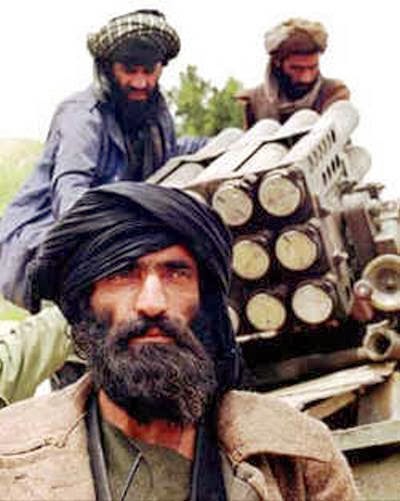 Inmates is plural, Rumley. I mean the lot of them but starting with the Americans. Try to find a coherent narrative that justifies retaining an American force in Afghanistan. They can define a purpose, even a role, but the very unstable nature of the structure and players they're dealing with defies reason.

Uh, we are keeping a thousand or so troops behind to uh, help train the 350,000 strong Afghan National Army to resist the, uh, thousands of Taliban or something like that.

When Dion should have stood up and made a difference, he caved. Ignatieff's opinions mirrored Steve's and neither were capable of forming intelligent policy on the issue . Obviously. It was all over when the neocons went off half cocked to pursue Saddam and the New American Century dream that dual citizens and the likes of Richard Perle, aka the Prince of Darkness had convinced them was their destiny. I've noticed the arrogant, greedy and egotistical are very susceptible to flattery, promises of untold riches and visions of Call of Duty dancing in their heads, if it comes from the right people. Likely a result of a lack of real world experience that's common among rich boys and misc. fanatics.

Something significant the Liberals could have used in subsequent election campaigns to illustrate the incompetence of Harper and his gaggle of head bobbers, if they hadn't caved to their self serving political instincts and just done the right thing.

I note the silence from the broad spectrum of right wingnuts on this topic now. All they can manage it seems is half hearted support for the Canadian Veterans of that totally foreseeable misadventure.