Funny You Should Mention That 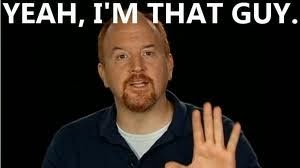 Comedians are, well, slightly unhinged.  You might have sensed that on some level but now the science is in.

In a study in the British Journal of Psychiatry, researchers analyzed comedians from Australia, Britain and the United States and found they scored significantly higher on four types of psychotic characteristics compared to a control group of people who had non-creative jobs.

"The creative elements needed to produce humor are strikingly similar to those characterizing the cognitive style of people with psychosis - both schizophrenia and bipolar disorder," said Gordon Claridge of the University of Oxford's department of experimental psychology, who led the study.

Although the traits in question are known as "psychotic", Claridge said, they can also represent healthy equivalents of features such as moodiness, social introversion and the tendency to lateral thinking.
Posted by The Mound of Sound at 8:42 AM