Live or Die. That's the Choice. 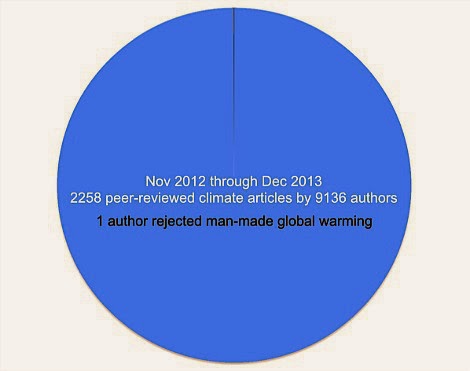 This is pretty succinct - "Heed the warnings in extreme weather - or risk losing Earth."   The idea is that when Atlanta, Georgia is frozen to a standstill and yet, on the same day, it's 61F in northern Alaska, you can take that as a warning.

Anders Levermann, a professor at the Potsdam Institute for Climate Impact Research, says it's time for all of us, including our leaders, to wake up.   And it's not enough for us to try to figure out what we must do for society to survive to 2100.  We need to decide whether we want mankind to survive after that because the way we're thinking now, that's not likely.

On Thursday, the Intergovernmental Panel on Climate Change officially released its latest assessment of the scientific basis of anthropogenic climate change, providing the huge body of science that support the much debated summary for policymakers agreed by the 194 governments some weeks earlier.

For the first time, future climate was not merely projected for the 21st century. About 20 climate models from around the world were used to look beyond the year 2100. They show that if greenhouse gas emissions continue to rise as they have done in the past, the Earth will warm by more than 10C and it won't stop there.

Yet this is not going to happen. Not because the physical models are wrong. They are built on fundamental laws of nature that we rely on in our every-day life, laws that were established more than a hundred years ago and that have been tested in countless laboratory experiments. For more than a decade, different models project practically the same temperature ranges for the same greenhouse gas emissions. So those who want to make the world believe that climate models are bad in projecting the temperature of our planet are wrong.

Still, a warming of our planet by 10C, as predicted by some models, is not going to happen – simply because the underlying assumption of these projections is that there will be an industry around that can produce further emissions of that magnitude.

What he's saying, in effect, is a lot like the old line about how lung cancer cures smoking.  In fact, it's just like that line. Climate change will cure us of our ability to emit ever greater quantities of greenhouse gases.

If unabated, climate change will simply come upon us. Just because we cannot compute the track of a hurricane does not mean that we will not have to face it. Events like this year’s heavy winter in the US, or typhoon Haiyan which destroyed parts of the Philippines a few months ago, show that it is the unanticipated extremes and their impact on our fragile infrastructure that we will have to worry about.

Such individual events might remain just as unpredictable in the future as they have been in the past, and they will continue to impact the global flow of goods, energy and information which connects economies across the planet and makes it one world. If Google’s headquarters in California were shut down by, say the lack of cooling during a heat wave, this would affect large and small business everywhere. If a severe storm was to hit the harbour of Hong Kong, the effects would not just be local. It would spread along the supply chains around the globe.

The temperature difference between the last ice age and our current warm period, which carried humankind into civilisation over the past 10,000 years, is less than 5C. This is about the amount of warming that we will have caused by the end of the century if we continue as we have done in the past. Only we are doing it about one hundred times faster than nature did while trying to keep a highly efficient global economic network running.

...No one knows where the limits of our adaptive capacity are, but a path towards 10C of warming will likely challenge these limits. The wall we are speeding towards may be hidden in the fog, but not knowing where it is does not make it vanish. The warnings provided by weather impacts on our society are quite clear. We can either take them seriously and turn around or find out the hard way.