If there's one symbol that best exemplifies the Harper government, it wouldn't be the beaver or the maple leaf or pretty much anything else we associate with Canada and being Canadian.  It would have to be this: 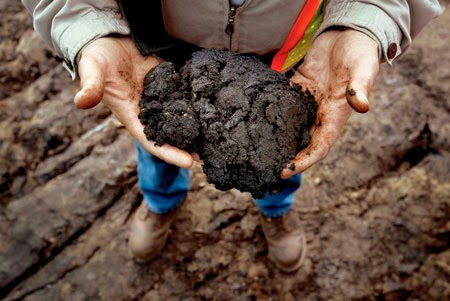 It would have to be two handsful of bitumen sludge, the very soul of the Harper government.  What you're looking at in this photo is precisely how they view Canada.  That's it, that's their vision, finis.

It's truly grating for someone of the coast to hear these greasy, scummy Drylanders bandy about the term "tidewater".   "Ahrr, matey, we must get the bitumen to tidewater."   Sorry, the tidewater you seek is already taken and we don't want your type anywhere near it.  And, while you're at it, stay away from our kids too.  That's the way you instinctively recoil from people in the grip of fetishes like our prime minister.

Even that bastion of looney Lefties, Forbes, doesn't hesitate to sound the alarm on the Carbon Bubble within which people like our prime minister blithely operates.

Scientists and economists say that going forward we must leave 80 percent of the current coal, oil and gas reserves in the ground in order to stay below 2 degrees Celsius and avoid the worst effects of climate change (which, at current levels, we are expected to reach by 2052). According to the latest estimates, the fossil fuel industry currently holds 5 times more in reserves than we can safely burn.

... Groups as diverse as Shell, Mercer, HSBC, prominent insurance companies and re-issuers, Standard & Poor’s and the International Energy Agency have been giving clear warning signs about continuing to invest in fossil fuels. Experts leading the divestment conversation have different suggestions for pathways to fossil fuel divestment.

From a fiduciary responsibility perspective, divestment also makes sense – as emerging risks to the value of portfolios become known, trustees and fiduciaries are obligated as prudent investors to incorporate this data into their investment allocation strategies.

The Forbes article is obviously written from an investment perspective but, hey, we Canadians, through our governments, are also investors in our fossil fuel resources.   We've invested through grants, subsidies and a variety of deferrals.  We have invested through the underpriced supply of our natural resources.  We have invested through the environmental degradation that may wind up on the taxpayer's plate.  We're investing when it comes to allowing fossil fuelers to run pipelines across our land.  We're investing through every risk we bear, voluntarily or otherwise.  You could say that Harper has us up to our collective necks in financial obligations and environmental risks directly arising out of his bitumen fetish.

The question is what happens if, as those referenced in the Forbes article, the institutional investors, decide that high-carbon, high-cost fossil fuels like bitumen are a lousy risk?   I'm betting that when that Carbon Bubble bursts they'll hear the "pop" first in the skies over Athabasca.

Steve Harper has a fiduciary responsibility to the country and the Canadian people.  He doesn't understand that and he's putting us and our economy in peril.

and stephen harper doesn't care. it is up to the voters of this country to make sure he cares or remove him from office. If we don't we have no one to blame but ourselves.

Back during the "great bitumen bubble", I wrote that the real bitumen bubble is the over valued nature of bitumen. Somehow we've gotten it in our heads that bitumen is oil, it isn't, it's a completely different asset class and a much lower quality.

The real bitumen bubble is when such a low quality asset is driven into bubble territory and approaches the price of WTI - a far cleaner and conventional source of energy. It was only a matter of time before investors figured that out.

But when, Richard, are investors and the Canadian public going to figure that out?

I have long suspected that bitumen is given an appearance of value by keeping the grants, subsidies and deferrals out of the discussion. What do you think?

The government depends on their mantra of jobs and "prosperity" to keep everyone in the dark. They act like we're Saudi Arabia and rich yet can't explain the need for more debt just to provide basic services. The Alberta government purely for the purpose of P.R. divided it's budget into "capital spending" and "infrastructure spending" along with launching the 2million dollar "building Alberta" propaganda campaign trying to tell people that we're building up "for the future" and not catching up after 30 years of infrastructure freeze and lack of planning.

The journal put out one good article on the real situation with the oilsands which has now long been buried:

One of the last things Klein did in office was admit he never had a plan to handle the province’s superheated growth. That lack of planning wasn’t just a problem for Albertans, it was a headache for other provinces that watched their workforce being sucked westward by the unfettered growth of the oilsands. It is a headache that has plagued Alberta ever since, too.

The good news for Alberta is economic growth and lots of good-paying jobs. But the other side of the coin includes environmental damage, wear and tear to our social fabric, stress to our seniors and missed opportunities for our youngsters.

We are spewing millions of tonnes of greenhouse gases into the atmosphere and creating lakes of chemical waste. Seniors on fixed incomes find it difficult to keep up with rising costs of living. High school students are dropping out at record rates, enticed by good-paying, but unskilled, jobs.

We have a clash of money and priorities. Energy companies want their mega projects. Albertans want new schools and roads. Everybody is competing for labour and materials.

Klein’s solution: “Delay the projects. Put them on hold until they’re affordable.”

By projects, he meant roads and schools. He didn’t mean the oilsands.

The late premier Peter Lougheed had a two-word description of what Klein had left for his successors: “a mess.”

“The Alberta government has let the development get ahead of the infrastructure,” said Lougheed in a brutally frank interview with the Institute for Research on Public Policy in 2006. “When you have that happen, you are going to start to have to pay a price for it.”

Lougheed’s solution was the opposite of Klein’s. “What is the hurry?” asked Lougheed. “Why not build one (oilsands) plant at a time?”

Klein’s successor, Ed Stelmach, was in a hurry, too, refusing to put his foot “on the brake” to slow down oilsands expansion. Instead, he tried, unsuccessfully, to increase the amount of royalties paid to the provincial treasury to at least pay for the infrastructure projects Klein had ignored.

It's a really hard battle to fight. The Canadian government does not want Canadians to know that there is basically no money at all in oilsands development, and as I wrote in my post "oilsands prosperity is a lie": http://canadiantrends.blogspot.ca/2012/11/oilsands-prosperity-is-lie.html

The first link in that post is an article covering a memo the alberta government had that warned them that the cost of the oilsands is going to exponentially skyrocket. The government knows they are not profitable at all and are using the people's money to subsidize them to simply make them affordable for the oil companies. Just recently the Alberta government announced it is providing a 1billion dollar government backed loan for the building of a new refinery. The costs are just going to go up more as time goes on and the people are going to pay for it.

We've never been able to afford these projects of last resort, they don't produce a profit at all and can only be sustained temporarily and at a cost to the citizens. Now with oils steady rise over and done with, this is simply going to get more apparent by the day. So long as Alberta pursues the oilsands as a source of revenue, there will never be enough revenue to balance the budget from now on and it doesn't matter whether you like these projects or not, the fact of the matter is they are not in your best interest and never have been. The temporary benefits some Canadians have received from them were just that: 'temporary' - a function of the way the oil market was working at the time. Government officials through kickbacks and industry promises have put in a considerable effort to convince Canadians their concerns are being addressed and that these projects are in fact in their interest. Alberta's $25M "rebranding" is a great, albeit small, example of just how much of your money these politicians are willing to spend to convince you this is all in your best interest.

This I believe regarding the oilsands is the primary message Canadians need to understand even more so than the environmental message. They are an economic black hole, there will be no benefit, no real economic growth, no jobs as TFWs become the dominating worker, and it's just going to get worse and worse as their cost continues to go up and up and more P.R. ploys are used to keep people in the dark, costing them even more money.

Whether it's building alberta, the economic action plan, or the old "spirit to achieve, freedom to create" - all of it as expensive as it was is much cheaper than actually trying to develop the industry properly. The government is pumping so much into P.R. to recover "their image" instead of actually fixing the problem which created that image, because to fix the problem would make the oilsands visibly uneconomical and the "ultra conservative" Albertans wouldn't like that. If Albertans ever came to understand how they're getting ripped off they would demand they were shut down in an instant. They're mad at the government for the debt, but they don't understand the debt is a direct result of the oilsands development and the government is working hard to keep it that way.

But, Richard, every Ponzi scheme comes with a built-in shelf life. They all fail abruptly even if not exactly at the expected moment. So just when does this scam collapse under its own weight? I do appreciate your insights on this.

When is an extremely difficult question to answer, and it will come in stages over a period of years.

As I wrote in my key concept 2: http://canadiantrends.blogspot.ca/2013/11/key-concept-2-currency-money-energy.html

I believe the USD will start showing signs of hyperinflation by 2015.

That's not really the end though, more like the beginning of the end.

The key event I'm waiting for is a gold backed Yuan. I think this is the event that will mark the turning point and sunset of western power.

Some factors may change this outcome though, bitcoin is quickly becoming a serious contender and may drive confidence from the USD even faster than the Yuan. China has banned their investment banks from trading bitcoin, I believe it's because of their plans for the Yuan and want to try to limit competition.

In any case I believe some event will occur between 2015 and 2020 that will trigger the flight from the USD.

Beyond that though I really can not say :/