Yep, That's the Face of Fascism All Right. 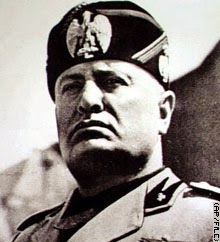 To Benito Mussolini, Il Duce, fascism was the merger of political and corporate power.

Now brace yourself for this, Canada.  There's probably nothing that says fascism more than the seamless integration of a state intelligence apparatus with the corporate sector.

Edward Snowden's latest bombshell came in an interview with a German public broadcaster during which he claimed that America's vaunted National Security Agency undertakes industrial espionage.

Snowden's claim the NSA is engaged in industrial espionage follows a New York Times report earlier this month that the NSA put software in almost 100,000 computers around the world, allowing it to carry out surveillance on those devices and could provide a digital highway for cyberattacks.

The NSA planted most of the software after gaining access to computer networks, but has also used a secret technology that allows it entry even to computers not connected to the internet, the newspaper said, citing US officials, computer experts and documents leaked by Snowden.

Snowden, unfortunately, didn't offer up details of how the NSA interfaces with America's corporate sector.   Last October it was revealed that CSEC, Communications Security Establishment Canada, offers concierge service to Canada's energy giants even if they're not Canadian.   They get together twice a year for the feds to pass domestic spying information to Big Fossil.  Their last soiree was hosted by Enbridge.
Posted by The Mound of Sound at 9:33 AM

It's coming fast and hard, open security state repression is the only piece left of the puzzle to implement.

Canadians are living in very evil times. Harper's Corporations are, bottomless pits of greed. Every time Corporations all line up at the trough and squeal for more money? Harper gives them another $60 billion in tax reductions.

Heads up on the meeting of the 3 Amigo's as well. I smell a big fat rat.

BTW - if there's any Photoshop artists out there, what would Harper's face look like superimposed on Benito's regalia?

I'll get on the Harper/Mussolini mashup today.

That'll be awesome, Joe. Thanks.

How can I get the image to you?

Hi Joe. Now you'll discover just how inept I am. I supposed you could e-mail it to me at parksbmw@shaw.ca