This Is No Time to Go Blind 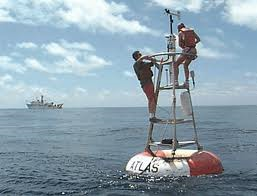 Several research papers over the past year have pointed to major changes to ENSO, the El Nino Southern Oscillation, that plays havoc with the weather around the world when it flares up.  It comes in two flavours, El Nino (the "little one") and his ugly stepsister, La Nina.   While ENSO impacts air currents, it's main sting comes in delivering major droughts and floods to entire regions with all the follow-on impacts such as heatwaves and crop failures.

Even as Australia bakes under all-time record heatwaves, its godsend has been a neutral ENSO state.  Had a massive El Nino come along the conditions in Australia could have been far more extreme.  It's important to remember than ENSO impacts not just the South Pacific but its reach extends to South and North America, Africa and Europe.

Yet now, just as ENSO may be growing from a firecracker into a hand grenade, the monitoring system that has proven so successful in spotting the onset of El Nino and La Nina phenomenon is falling apart.

Nearly half of the moored buoys in the Tropical Atmosphere Ocean (TAO) array - a network of deep-ocean buoys at 67 sites in the equatorial Pacific that collect ocean and atmospheric data - have failed in the last two years, says a report published in the journal Nature.

Scientists are now collecting data from just 40 percent of the array.
"It's the most important climate phenomenon on the planet, and we have blinded ourselves to it by not maintaining this array," said Michael McPhaden, a senior scientist at the US National Oceanic and Atmospheric Administration (NOAA) in Seattle, Washington, DC.
The network was developed over the course of a decade following the massive El Nino of 1982-83.
The array's troubles began in 2012 when budget cuts pushed NOAA to retire a ship dedicated to performing the annual servicing that keeps the TAO buoys in working order, added the report.

The TAO sensor system has been one of those things the Americans have funded out of their own pockets and we've all had the benefit of it for more than 30-years.   Maybe it's time everyone else finally bought a round, chipped in to get TAO up and running normally again.  We may regret it if we don't.  This is no time to go blind.

Update:  The Australian (paywall) is reporting this morning that the first signs of an El Nino building have been detected.   Meanwhile, the Sydney Morning Herald is reporting that, fresh on the heels of last week's record heatwave, another heatwave is about to hit Australia.  Fortunately Australians have elected a prime minister who knows that global warming is a fairy tale.
Posted by The Mound of Sound at 9:16 AM