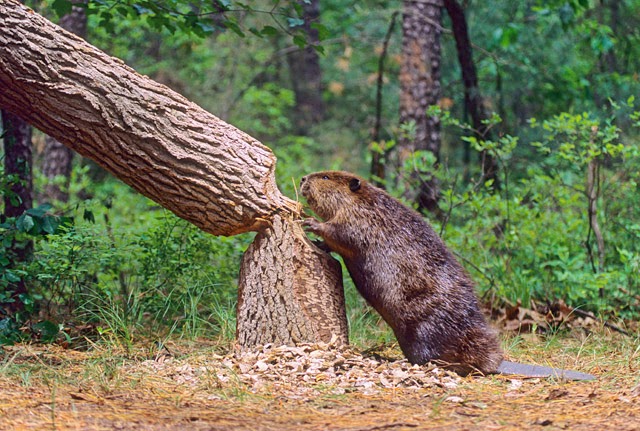 Britain has been hammered by prolonged and massive flooding in recent years.  One solution being advocated by UK's Mammal Society is to reintroduce the beaver to Britain's wetlands.

The cheapest and most effective way to control river flooding in Britain would be to bring back beavers to construct natural dams to hold back water, the UK Mammal Society has recommended to environment secretary, Owen Paterson.

The rodents, known as "master river engineers", nibble and fell trees to create large lodges which restrict river flow, store water, and reduce flash floods and erosion. The UK has been lashed with storms and flooding in the past two months, with the south-west particularly badly hit, and David Cameron saying on Wednesday that it is unacceptable that parts of Somerset are still underwater.

Marina Pacheco, the society's chief executive, said: "We urge the government to consider a bold and cost-effective wildlife solution: bring back the beaver and allow it to apply its benign engineering skills to our river systems. Our waterways are fed by man-made ditches and field drains that reduce the land's natural ability to hold water. Excessive flooding of towns, villages and farmland in the lowlands is the inevitable consequence of this unnaturally rapid transfer of water from the hills."

A word to the wise.  If you're going to reintroduce beavers to Britain, go for the European variety.  Last year I watched a nature documentary about "super beavers" that were savaging the Russian hinterland.  It turned out they were Canadian beavers that had been imported and escaped to the wild to become an invasive and unexpectedly destructive species.
Posted by The Mound of Sound at 8:55 AM

I had no idea they ever had beavers. Live and learn . . .