A Nation Awash in Pigs and Guns. What's the Problem? 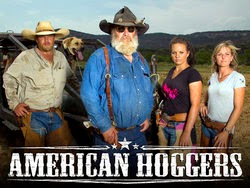 How can a nation with a lunatic gun culture ever find itself at the mercy of pigs?

The United States, or at least 39 States so far, is being overrun by a burgeoning population of wild pigs.  There's even a TV show about a family of L'il Abner rednecks who make their living at pig pest control.

In the past 30 years ...their ranks have swollen until suddenly disease-carrying, crop-devouring swine have spread to 39 states. Now, wild pigs are five million strong and the targets of a $20-million federal initiative to get their numbers under control.

Settlers first brought the ancestors of today’s pigs to the South in the 1600s and let them roam free as a ready supply of fresh pork. Not surprisingly, some of the pigs wandered off and thrived in the wild, thanks to their indiscriminate appetites.

Wildlife biologists can’t really explain how pigs from a few pockets were able to extend their range so rapidly in recent years. “If you look at maps of pig distribution from the eighties, there's a lot of pigs, but primarily in Florida and Texas,” says Stephen Ditchkoff, a wildlife ecologist at Auburn University. “Today, populations in the southeast have exploded. In the Midwest and the north it's grown to be a significant problem.” Ditchkoff believes sportsmen transported the pigs so they could hunt them on their land.

As pigs spread, they wreak havoc on the lands they inhabit. Wild pigs cause at least$1.5 billion in damages and control costs each year, according to a 2007 survey, mostly to agriculture. Dubbed the “rototillers of nature,” they dig up fields, create wallows in pastures and destroy fences. A church in Texas was so worried that pigs would devour its annual pumpkin sale that it lobbied the local government to let hunters stand watch over the patch at night. They were right to fret. The 2.6 million pigs in Texas cause $500 million in damage each year—a liability of $200 per pig. “I’ve never seen any one species that can affect so many livelihoods and resources,” says Michael Bodenchuk, state director of Texas Wildlife Services. He is particularly worried about harm to native species and the 400 stream segments in Texas that are infected with bacteria from the pigs’ defecation. Heeding concerns from state wildlife agencies, the U.S. Department of Agriculturecreated a new national program in April to halt and reverse this trend. It aims to wipe out pigs from two states every three to five years and stabilize the population within a decade. Dale Nolte, national coordinator of the program, says his first priority will be states with the fewest pigs; he will then work back to those like Texas that are overrun. One reason he wants to confront the states with the fewest pigs first is because the animals reproduce rapidly once they invade an area. If 70 percent of the pigs in a region are killed, the remaining ones can have piglets fast enough to replace all those lost in just two and a half years.