It's What Fascists Do. Harper Comes Gunning for Our Rights and Freedoms. 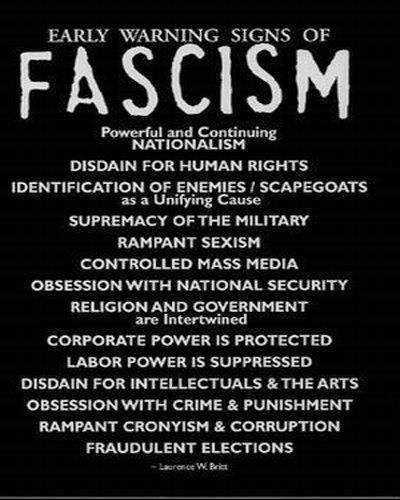 Just as the terrorist attacks of 9/11 were exploited to transform the United States into a place ruled by fear and suspicion, the ultimate surveillance state where even indefinite and secret detention without trial would be permitted, so too will yesterday's shooting in Ottawa provide Stephen Harper the pretext to whittle down the rights and freedoms of Canadians in the name of fighting terrorism.

This would be disturbing even if it wasn't the handiwork of an utterly fascist bastard like Harper.  Coming from him, however, there's no excuse for naivete.

"Canadian prime minister Stephen Harper pledged more surveillance and detention powers for security forces in Canada on Thursday after a gunman killed a soldier and rampaged through parliament before being shot dead.

"Addressing the House of Commons just metres away from where the gunman, a reported convert to Islam, was shot dead on Wednesday, Harper said lawmakers would expedite new powers to counter the threat of radicals."

In Harperland, dissent is extremism and all those opposed to this government's unprincipled and disastrous policies are radicals. 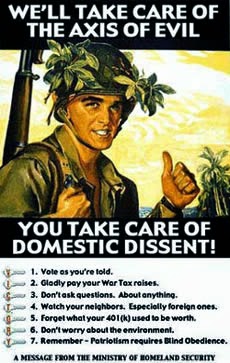 Like the Bush/Cheney thugs, Harper wants to act before anyone gets too close a look at the screw-ups that contributed to the attacks on our soldiers.  There'll be no discussion about existing powers of surveillance and detention much less whether, properly exercised, these existing laws might have prevented these deaths.

That's the answer to gross negligence, including leaving a young corporal with an unloaded weapon to stand Target Duty at the war memorial; just say the laws aren't good enough and exploit those deaths to gain more powers in your quest to transform Canada into an increasingly illiberal democracy.

With a man as patently unscrupulous as our prime minister, these new laws are aimed to reinforce the surveillance state that Canada has become under his rule and he'll use those powers as freely against ordinary, law-abiding Canadians who resist his wishes as he will against anyone else.

It's time the leaders of our opposition parties stood up for Canada.  Demand an inquiry into what went wrong and how these deaths happened.  Challenge the government in the Commons about leaving that corporal on Target Duty at the war memorial just after another soldier had been targeted and killed outside the base at St. Jean, Quebec.  Demand safeguards to ensure that these supposed new powers won't be abused by this government that routinely abuses power even in defiance of the rule of law.  Harper is counting on his ability and track record of cowing the opposition and it's an impressive record to be sure.

The opposition have done nothing regarding Harper's treachery, to this country and the people.

I say, Harper is a traitor doing acts of treason for, selling Canada to Communist China.

Harper has used every dirty tactic in the book, to stay in office. Harper intends to win, using his ethnic votes. There will be more Chinese in Canada, than Canadians.

As far as Harper gives a damn about Canadian citizens? Harper loves Harper and that is all he cares about.

Thanks, Ron. I enjoyed it so much I posted it separately.

Sorry, I credited you by name. I wasn't thinking. Damn, now you're a "radical" too.

Do people who say the opposition needs to do more realize that a majority government in Canada can basically do whatever the hall they want (for the most part, though thankfully we still have the chat much the charter)? Not much the opposition can do when it comes right down to it because not matter what, the Conservatives have enough votes.

Yes, Anon, I think we all get that. Harper has a majority. That said there's an awful lot the opposition can do if they're willing to get off their useless arses.

I recall another Tory majority government not all that long ago, do you? Do you remember what a gang of young opposition MPs did to that Tory government and its leader? I do. They were parliamentary pitbulls. They dogged that government at every turn and they were relentless. Their attacks chiseled away at that government's credibility and they connected with a disaffected public.

Those opposition MPs were instrumental in the utter destruction of the Tory party and they paved the way for the return of a Liberal majority government under Chretien.

So, please, don't give he that "not much the opposition can do" bullshit.

I think Anon and MoS are both correct, to a degree. We probably need to expand the scope of discussion to include all of government which, in Canada, means the Crown (GG), the Constitution, the Commons, the Senate, the Judiciary, and the provinces, really the most powerful.

I think the Opposition has done a good job in the circumstance. The Liberals had to be resurrected from near-death, to manage without Bob Rae, and to groom their greatest asset: a leader legitimately elected by the membership (unlike Ignatieff who was appointed by the Executive)---this is the single biggest factor in bringing disaffected Liberals back to the fold; by sitting the last one out, they allowed Harper a default win. No doubt the Liberals will improve their seat-count and, given the NDP strength in Liberal wastelands of BC and Quebec, most of it will come at Harper's expense elsewhere, Ontario and the Atlantic provinces. All of this will make up for their rather drab opposition in the Commons; we mustn't forget that, as third party, they have very little opportunity to make parliamentary waves---which is probably just as well while Justin's still wet behind the ears.

The NDP's done fairly well in Opposition. Again, it has circumstantial factors to consider: the Greens will split seats away from the NDP in BC and the Bloc in Quebec whose erstwhile supporters fled to the NDP en masse last time. Mulcair, himself a Quebecker, is highly sensitive to this fact and is exceedingly careful about it. Nevertheless, Mulcair did a superb job in holding Harper's feet to the Duffy fire, earning himself best leader polls. This will come in very handy in the new year when the Duffy trial ensues---not only that the trial will put Harper in bad light, but also that it will remind voters of Mulcair's sterling cross-examinations of Harper all those months ago---and we all know how short the electorate's memory is. In this case the issue will seem organic, instead of contrived.

True that it's the best that parties without a majority can do, but it will pay off soon.

Harper's problems are really of his own making: a shrewd political strategist he is not. Start at his deal with Peter MacKay who betrayed the Progressive Conservatives to Harper; the rift remains even as many PCs fled to the Liberals, especially on the East Coast. Apparently stuck in minority land, Harper had to make promises to religious backbenchers not to make waves before getting a majority. The resulting dissatisfaction manifest in one backbencher becoming an Independent; the Constitution has bested Harper every time, with Insite and medical marijuana, but no more so than with First Nations who, on their own, scotched Harper's smear job in Attawapiskat with the Idle-No-More movement; he took a run at the courts and got spanked, then, vis a vis the William (Tsilhqot'in) decision, got his prize pipeline crimped at the BC boundary;
the veterans snub was maybe one of his dumbest mistakes-- now they're resolved to coordinate an Anybody-But-Harper campaign; charges of disloyalty arose from Temporary Foreign Workers bumping Canadians out of jobs; the Senate has been a disaster, and not just because Harper couldn't make good on reforms, but because of Duffy, Brazeau and the rest;


Provinces have barred their teeth at Steve. Saskatchewan told Harper where to go when it came to selling off the public potash enterprise. Danny Williams' Newfoundland became a no-conservative zone after Harper challenged him on resources. Christy has her "Five Conditions"--nothing Steve can do about that.

Point is, when you look at all of the government of Canada, which includes all these aspects intended as checks and balances, you can have your opinions about the Opposition in the Commons, but you can't say Harper's cowed any of the others. His joust with the Supreme Court ended exactly as it should have: he lost---again. He's led one of the most lacklustre governments ever.