What Are We Getting Ourselves Into? 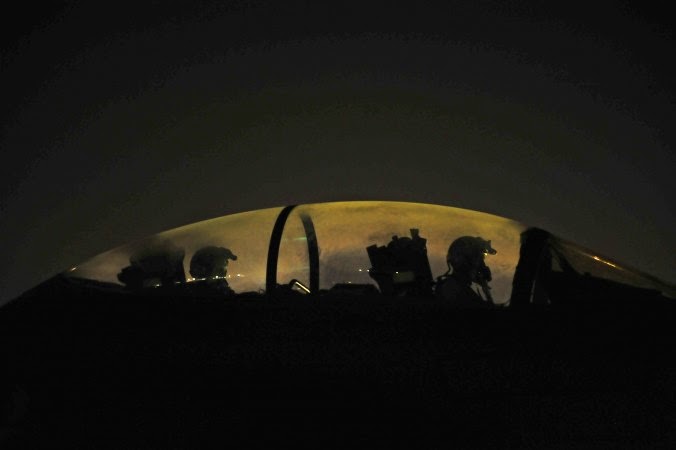 Before long the Middle East will look like a parking lot for Western jet fighters. The place will be awash in Hornets and Super Hornets, F-16s, F-22s, Eurofighters and Rafales and Tornados.  They'll be flying about over Syria and Iraq searching for something, anything to bomb into rubble and pulp.

Nobody thinks that airstrikes are going to win this "conflict" with IS or ISIS or ISIL or whatever they happen to be called this week or next.  We'll run out of targets first. Then what?

The job unfinished, we will probably succumb to "mission creep."  Airpower didn't do the trick, let's switch to the ground game.  It will be sold to us as a choice in which we have no other choice.  We'll do it because we must.

At this early point it's timely for us to dwell a bit on just what we've gotten ourselves into.  Is this a war or, as I suggested a few days ago, just a bunch of battles strung together a bit incoherently?  Do we have an actual enemy or are we just banging away at the group fronting for the actual enemy we work so hard to avoid recognizing?

Are we standing, unaware, on the very edge of WW III?  That's not my question but it is being asked in some very high places.

Dr. Anthony Cordesman, of the Centre for Strategic and International Studies, rebukes the US in a paper he published on Thursday.  On the great difficulty of implementing coalition-based strategy, he writes: "This is particularly true when the US fails to honestly address its own problems and mistakes, minimises the costs and risks involved, and exaggerates criticism of its allies."

...But ask him about that Franz Ferdinand moment and suggestions pour out of him.  Syria could shoot down a Turkish aircraft; the humanitarian dimension could be messed up; human displacement - "you can surely count on people to not understand that intervening to deal with a few thousand people can displace hundreds of thousands"; if IS advanced to a position from which it "threatened all of Iraq"; Iraq's Sunnis could refuse to co-operate with the new Shiite dominated government in Baghdad; if violence broke out between Turkey and its Kurdish minority and Iraq's Kurds attempted to join in; if the Assad government in Syria was to stop up its bombing of rebel forces "it could become a political problem too big to ignore"'; and lastly, if IS was to lash out with a campaign of terrorist attacks that would provoke demands to escalate the coalition campaign.

"Fully agreeing" with the idea that the conflict has been miscast as war in two countries, rather than as a regional or even bigger conflict, veteran White House adviser and CIA analyst Bruce Riedel's response to questions was a dire email in which he posits the current crisis in a seriously global framework.

"Al Qaedaism, the ideology, is stronger today than ever, thanks to the failure of the Arab Spring [which we welcomed] and the battlefield has expanded from Mali to Pakistan and beyond to Australia and Europe," he writes.

"The worst nightmare for me is a terror attack that provokes Indo-Pakistan war; second, is a Mubai-like attack in a Western city."

Another veteran observer of the region warns this is going to take years, possibly decades to play out and during that interval could well spill out across the Middle East/South Asia region.

"There is a serious risk that the entire region will blow up," Lakhdar Brahimi warned in an interview with Der Spiegel magazine, in which he predicted dire consequences for Syria, Iraq, Jordan and Lebanon. "The conflict is not going to stay inside Syria.  It will spill over into the region.  It's already destablising Lebanon [where there are] 1.5 million refugees."

Analysing the global misreading of how events might unfold in Syria, Brahimi harped back to an earlier assignment in his career": "It reminds me a lot of 1999 - then, I resigned from my first assignment as a UN special envoy to Afghanistan, because the UN Security Council had no interest in Afghanistan, a small country, poor, far away.  I said one day it's going to blow up in your faces - it did [and] Syria is much worse."

And as for the notion implicit in the rhetoric of Obama and his coalition cheerleaders, that Syria somehow is to be rescued by and into the civilised world, Brahimi thinks otherwise - "It will become another Somalia.  It will not be divided as many have predicted.  It's going to be a failed state, with warlords all over the place."

I don't think Canadians are willing to think about or admit just how much of a problem we will face in the near future regarding Muslims if this stance continues.

.. reminds me of tourists in sunsplashed tropical locations, surrounded by abject poverty with security (military) manning the compound entrances, especially the beach access. Inside the elite resorts, lobster, champagne, sunscreen, banana boats, floating bars.. all you can eat

This sounds like noble military tourism a la Stephen Harper complete with front line tours and election money shot, photo opps.. the problem being how Harper et al equate number of jets n deaths with political risk - gain or national disgust.. Thus into the Valley of Death flew the 6 jets and the 600 valiants.

It's the Muslims we consider allies, Anyong, who are probably the most dangerous threat we face.

@ Sal - you're absolutely right. This isn't Canada going to war. It's a political gesture by a prime minister failing at everything else.

Unpleasant details about the Noble Crusade. Good read for Rae and Axworthy.

When Tony Blair & George Bush 'fixed" the intellingence on Iraq to facilitate an invasion it signalled the begining of a modern day 100 years war.
It aint over till the fat lady sings!
The fat lady has not yet been born.