It's All We Know 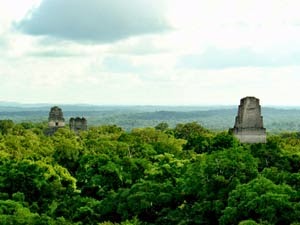 I wonder if the ancient Mesopotamians, or the Mayans or the Easter Islanders had their "it's all we know" moment before their civilizations faltered?

The Mesopotamians, for example, are widely taken to have created modern society in the "cradle of civilization" - the fertile delta where the Tigris and Euphrates rivers meet the Persian Gulf.  There it was possible to develop intensive agriculture aided by irrigation from those two mighty rivers.  That was accompanied by population growth, the networking of settlements that became cities and a civilization.

What the Mesos didn't understand, at first, was that some of the river water they were using for irrigation was brackish - contaminated by the mixture of saltwater from the Gulf.  It doesn't have to be particularly salty because the salt remains in the soil as the water evaporates and, given enough time, even trace amounts of salt build up until, in fairly short order, the farmland becomes sterile.  Crops fail, society fails.  At some point the Mesos must have figured it out which would probably be their "it's all we know" moment - just before their civilization collapsed.

The Mayans went through a similar process.  So, too, the Easter Islanders.

Our civilization is far more complex than anything that has preceded us.  We have a more or less interlinked, global civilization.  We have a global economy and, while we're not all on the same page, those behind are racing to catch up.

We have a global civilization anchored in models - economic, social, geo-political that have been developed over generations, in some cases centuries.

Like the Mesopotamians, it really never occurred to us that the same things that made us great could lay us low.  Abundant, cheap fossil energy is the prime example albeit it's just one.  Our slavish embrace of perpetual, exponential growth is another.  Even parasites can multiply until their numbers overwhelm the host at which point it's over for the host and the parasites as well.

Our models - economic, industrial, social and political - have transformed us into a plague of parasites on the Earth.  When we consume the Earth's resources at 1.5-times their natural replenishment rate, a rate that grows steadily with each passing year, we're on a one-way road and it's all downhill.  It's what we do.  It's all we know.

Fear.  There's plenty of that going around.  It's one of the most powerful motivators there is. Most of us respond to it instinctively and those who feed so much of it to us know it.  Foreign terrorists know it. They don't have to attack us in our homes.  They don't have to have the means to do it.  It's enough for them to say it knowing we'll respond just as they would have us do.

There's a group of domestic terrorists who do the very same thing.  They inculcate fear in us to achieve desired responses.  These terrorists come from our political caste and from the ranks of the rich and powerful.  Stephen Harper loves terrorizing old white people, his base.  He scares the shit out of them, plays to their basest instincts, and watches as they respond, turning out en masse to vote for him.

These domestic terrorists use fear to crush any hope of challenging the status quo.  If you want to thwart any effective effort to respond to climate change, tell the public that it will destroy the economy, their economy.  Feed them a dark vision of being without a job, the house in foreclosure, a tow truck driving away with the family car.  Problem solved.  And these domestic terrorists know what their foreign counterparts know - just saying it works.


What has happened? Why this shadow over the dinner table and such strange fears? It seems we have the remorse of Pandora. The empowering, all-opening, all-devouring technological spirit we have let slip from the box has turned into a monster, giving the killers-for-a-caliphate new powers to recruit, the dictators new means to repress, the spies new means to listen in, the fear mongers new means to spread alarm, the rich new means to get richer at the expense of the middle class, the marketers new means to numb, the tax evaders new means to evade, viruses new means to spread, devices new means to obsess, the rising powers new means to block the war-weary risen, and anxiety new means to inhabit the psyche.
Hyper-connection equals isolation after all. What a strange trick, almost funny. The crisis, Antonio Gramsci noted in the long-ago 20th century, “consists precisely in the fact that the old is dying and the new cannot be born.” Many people I talk to, and not only over dinner, have never previously felt so uneasy about the state of the world. There is something in the air, fin-de-siècle Vienna with Twitter.
Hope, of course, was the one spirit left behind in Pandora’s Box. One of the things in the air of late was a Google executive dropping to earth from the stratosphere, a fall of 135,890 feet, plummeting at speeds of up to 822 miles per hour, and all smiles after his 25-mile tumble. Technology is also liberation. It just doesn’t feel that way right now. The search is on for someone to dispel foreboding and embody, again, the hope of the world.

When you're chronically insecure, surrounded on all sides by fears, some real and some implanted, "it's all we know" becomes the default option.  When you are made to believe that the path ahead is a minefield it can take a lot of courage to challenge the lie.

It was a decade ago that our modern existence was given a new name - "precariat."  It's a term that applies to most of us.  Wiki defines it as, "a condition of existence without predictability or security, affecting material or psychological welfare... "

Back in the day, then Federal Reserve chairman Alan Greenspan credited "growing worker insecurity" for a lot of the success of the American economy during the Clinton years.  To the plutocracy, worker insecurity is a powerful advantage.  It's a very good thing indeed.

Have America's precariat taken to the streets in revolt?  No, they've just taken extra part-time jobs.  You can't revolt when you've got 20-minutes to get from job A across town to job B.  You do it because it's all you know.

Which brings us to Naomi Klein's new book, "This Changes Everything."  Klein makes very cogent and compelling arguments for transitioning from neoliberal, free market capitalism to a new economy based on equity, effective tax policy and, yes, asset redistribution.  The author contends that climate change renders such a transformation imperative, inevitable.

The best feature of Klein's transformative vision is that it can be accomplished in an orderly and peaceful fashion, avoiding the chaotic and often violent change of revolution and counter-revolution.

Yet privilege and advantage, even if completely unearned, are almost never surrendered voluntarily.  They're almost always defended by whatever means deemed necessary. When you have a society, conditioned by insecurity to accept quasi-servitude in a neoliberal order, a state of corporate feudalism, the forces of privilege and advantage have the whip hand.  If unrest begins to smolder, it's a simple matter of dousing it with another bucket of fear.

It can't go on forever.  It can't go on much longer.  Neoliberalism is the economic equivalent of a three pack a day habit.  It has been instrumental, indispensable in the creation of our current crises of climate change, overpopulation and over-consumption.

What Naomi Klein is advocating is really a "best case" scenario but we have been sufficiently conditioned that we will not see it that way.  We won't give up the very institutions that are propelling us to collapse.  It's all we know.

M.O.S. says, " Klein makes very cogent and compelling arguments for transitioning from neoliberal, free market capitalism to a new economy based on equity, effective tax policy and, yes, asset redistribution. The author contends that climate change renders such a transformation imperative, inevitable." Kline could be describing Kobani now under siege by I.S.I.S.

Pepe Escobar writes, "So Kobani is now a crucial pawn in a pitiless game manipulated by Washington, Ankara and Irbil. None of these actors want the direct democracy experiment in Kobani and Rojava to bloom, expand and start to be noticed all across the Global South. The women of Kobani are in mortal danger of being, if not enslaved, bitterly betrayed." http://www.atimes.com/atimes/Middle_East/MID-01-241014.html

My reading of history has many instances of democracy being destroyed by various greedy powers. Klein sees the future through rose coloured glasses.

Mound, you have written some excellent posts. I think this is one of the better ones, although infinitely pessimistic it portrays the human condition clearly. It is unlikely there will ever be a voluntary change, while some societies may try, they will fail. There are just too many societies that are growing at a rate that is unsustainable, Muslims the world over come to mind. The Chinese tried a one child experiment and we know how that turned out. The so-called Western countries are voluntarily reducing their birthrate to the point we are not replacing a two-person family and as such, through immigration our historic demographic is changing.

An Apocalyptic event is likely the only solution to reducing as you say, the parasites, us.

We have the tools, nuclear, chemical, germs but these would be selective and acts of war which of course would result in retaliation, probably killing off the whole bunch of us. Then there’s the results of our over population and consumption; starvation, lack of water and breathable air. That will kill the masses, the you and the me, disproportionately. Many of us know what is on the horizon but feel powerless to make a meaningful contribution, we hope we will be gone before the apocalypse occurs.

Is that pessimistic enough, is there another way?
Norm

Hi Toby. Not sure what to make of the Kobani article. Escobar seems to credit American policy with a coherence I've been unable to detect.

Anti-democratic forces have been around since John was forced to sign Magna Carta. There doesn't exist a right or freedom that, left unexercised or undefended, won't be taken from us because those rights and freedoms have power that is immensely valuable to those who would take them. It seems lost on so many today that virtually every right, every freedom we hold today was fought and paid for, usually in blood, often more than once.

Norm, I too am pessimistic about the prospects of change. The High Priests of wedge politics, including the current occupant of 24 Sussex Drive, fully appreciate the value of a society divided and how it neutralizes any prospect of social cohesion.

After I had written this piece I came across Richard Cohen's column in the NYT and chose to use an excerpt because it speaks to the pervasive disquiet we live with today. I was drawn to the final sentence in this passage: "The search is on for someone to dispel foreboding and embody, again, the hope of the world."

Cohen is writing of a charismatic leader but such individuals are just as often malevolent as benevolent.

Chris Hedges writes that, if we wait until revolt is upon us, we have a serious likelihood of some thug emerging from the chaos. The longer change is forestalled the greater the prospect of an undesirable outcome.