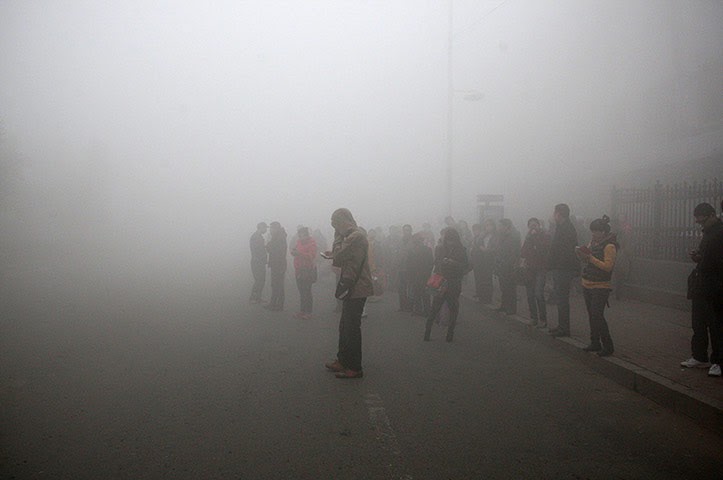 Their proper name is PM2.5 and they embed themselves deep into lung tissue. They're a real bugger.  And, once again, small particulate pollution in northern China has hit 20-times the World Health Organization maximum healthy threshhold.

The WHO says particulate levels should not exceed 25 micrograms per cubic metre of air.  Beijing is currently at 300 with neighbouring areas hitting upwards of 500.

The IARC and WHO designate airborne particulates a Group 1 carcinogen. Particulates are the deadliest form of air pollutiondue to their ability to penetrate deep into the lungs and blood streams unfiltered, causing permanent DNA mutations, heart attacks, and premature death.[4] In 2013, a study involving 312,944 people in nine European countries revealed that there was no safe level of particulates and that for every increase of 10 μg/m3 in PM10, the lung cancer rate rose 22%. The smaller PM2.5 were particularly deadly, with a 36% increase in lung cancer per 10 μg/m3 as it can penetrate deeper into the lungs.

Some bright light thought this would be an ideal time to host a cycling race, the Tour of Beijing.  Yeah, right.

In preparation for next months' APEC leaders summit, Beijing is planning to sharply restrict vehicle use and to get neighbouring areas to shut down polluting facilities.

...most locals were not wearing protection Friday, and several people said they believed Beijing was being hit by natural haze, rather than pollution.

Even so, sitting in a Beijing park 82-year-old Liu Shuying said: "There are too many cars.  I don't wear a mask because I'm not afraid of death."

If you have an area in which tens, perhaps hundreds of millions of people are exposed, year after year, to massive levels of atmospheric carcinogens that are embedded in lung tissue you have a mass cancer problem on your hands.

Your picture speaks volumes. It is exactly what it was like when I was there and had to leave due to breathing problems. It is difficult to hear Canadians make comments such as, "it's only fog".

I can't imagine what it must be like, Anyong, to have to endure this seasonally with every passing year. In a way you were lucky. You were able to leave. Most don't have that option. I'm surprised they aren't rioting.