What Is It Going to Take? 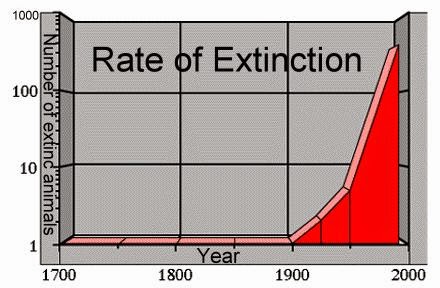 What's it going to take for the Liberals and NDP to place the environment at the very top of their agenda?

I would have thought yesterday's seismic report that Earth has suffered the loss of half its wildlife over just the past 40-years might have done the trick.  Apparently not.  Damn few, it seems, really care about such things.

Ask yourself what this complacency means for the fate of the surviving half of our planet's wildlife.  If we're so blasé to the body blow we've already dealt biodiversity it's hard to imagine we're going to take any drastic measures to defend what remains against what really threatens these lifeforms - our rapacious overconsumption.

It's one thing to observe that mankind is consuming the Earth's renewable resources at 1.5 times their replenishment rate.  Bad humans, bad.  That fact takes on a far more serious dimension when you realize that every other life form on the planet also depends on those same resources for its existence.  If we take more than everything, what remains in store for everything else, the surviving fraction?  Answer: oblivion, eventually.

Species extinction is occurring, by some reports, at up to a thousand times the natural rate.    That would certainly seem to be in keeping with the loss of 50% of Earth's wildlife over the past four decades.

A number of scientists warn that we may have already triggered a mass extinction event, the sixth mass extinction in our planet's history.  This time the great die-off is human driven.

It's quite a nest of vipers we've got here.  Loss of wildlife; species migration and extinction; disease and pest migration; overconsumption and resource exhaustion (fisheries, farmland, forests, fresh water); droughts and flooding (especially the flash flooding so commonplace over the past few years); polar ice loss and sea level rise; global inequality and food insecurity; and, oh yeah, global warming and ocean acidification.

Really, what's it going to take for this to become the most important problem, the top of the agenda, for the Liberals and New Democrats?   By act or omission, we're taking decisions today that will heavily impact the lives of our children and grandchildren and some of those decisions are irreversible.  It's not unreasonable to expect our opposition leaders to make the environment their priority.  Given the stakes to both us and to our descendants, that's their responsibility, their duty to the country and to us.
Posted by The Mound of Sound at 10:00 AM

Politicians of all stripes have learned to avoid issues dominated by these three camps.

It sounds to me, Alison, like you're saying we're screwed.

How many times a week do you drive your vehicle? Where is your thermostat set? Do you purchase local produce? How many people do you know, who recycle wood products and reuse wood to build and so on and so on.

I don't know if we're screwed; I do know there's no point in looking to Canadian politicians for leadership on this. How many times do you think the word anthropocene shows up in Hansard?

It's up to us as people outside that narrative, Mound.

Losing wildlife makes me absolutely ill. Harper the Hun sold Canada to Communist China. We know, China has polluted much of their farmland and 40% of their water. Dead pigs come floating down China's rivers.

Communist China fouled their own country and now, Harper is bringing China over, to foul our country. I have no doubt dead wildlife and fish, will float down Canada's rivers, as they do in China.

Communist China will hack down BC's ancient forests. China will force the dirty Enbridge pipeline into BC. Communist China is building their LNG plant, near Prince Rupert. Gawd help us. China is going to start construction on their cluster of coalmines in BC's High North.

I don't want to even try to imagine? What this country will look like, after 31 years of China destroying this country.

Naomi Klein has made the case. Given her connections, you'd expect the NDP to pick up her argument and run with it.

@ Anon 12:35. I drive once or twice a week. I use my trips to do all my shopping. My route is planned out in advance.

My thermostats are set to "off." When I'm cold I use a wood stove to warm the house and drive out the damp.

Yes I buy local produce and meat, poultry, seafood, etc. There's an abundance of it where I live.

I don't use much wood but my firewood is from trees that logging companies reject that would otherwise be bulldozed into a heap and set on fire on the side of a local slope.

@ Alison - I agree that we all have to push for change but I don't see, among my fellow citizens, that much of a drive to do it. Given that the IEA has concluded we have until 2017 to implement serious reductions in GHG emissions or we're locked in to catastrophic climate change, I can't see much hope.

Our provinces and non-fossil industries have made great strides in decarbonizing but Harper wants to keep expanding Athabasca.

@ Owen - Unfortunately the Left has accepted neoliberalism as inevitable. Alison is right. The political caste isn't going to do anything.

The political caste rarely does anything outside its own narrow interests of seeking to be re-elected until forced to. Think of the big social movements of the last century and how governments resisted embracing them and often still do.
In Canada this is exacerbated by a combination of 1) a first past the post electoral system which precludes electing viable alternative progressive voices, 2) concentrated corporate media ownership which ignores those voices, and 3)an accident of geography which allows us to fire-sale off our resources instead of coming up with sustainable alternatives. Having thrown all our eggs in the tarsands basket, we are loathe to make a late start at alternatives other nations are already way ahead of us on. These things combine to make us stupid and elect the wrong leaders, while our current crop of non-Con politicians are not so much neoliberal ideologues as afraid to chart a course too different than Harper's.

That said ...
Remarkable things are being done in the rest of the world to address the human footprint and animal extinction. It's just particularly tough being Canadian right now.

I should have typed you (plural). Not many people where I live make an effort to take their own bags to pack their groceries.

I just read that the Fraser Institute is declaring the climate change fraud to have come of age, arguing that there has been no discernable surface warming for 18-years. Naturally the science and mountain of research is being refuted by a Fraser Institute economist.